XBOX Hdd is not working :((

I was trying to upgrade my HDD with chimp but end of the sequence I can’t get pass the startup screen (without Microsoft logo). I tried xbhdm both disc and usb but no luck but Iooked at the HDD, C and E files is there but they’re empty. Btw i tried Hexen and og xbox installation discs but again doesn’t worked. I’ll add the board’s picture and you’ll notice that the chip is different and an odd one. I also have HDD’s eeprom.


Is this situation salvageable or is it dead? I also have an non-chipped non-softmodded spare one as well. Thanks in advance. 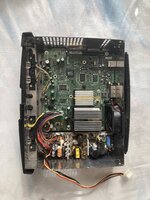 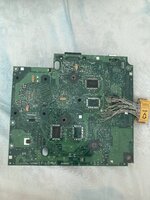 Iooked at the HDD, C and E files is there but they’re empty. Btw i tried Hexen and og xbox installation discs but again doesn’t worked.
Click to expand...

How did you look at these partitions? If the console is dead, I assume you attached the drive to a computer?

What happens when you boot the console with these discs? Does a splash screen appear? Do you get an error message in several languages?

Most importantly, WTF is soldered to your board? If those are alt points for the LPC, I've never seen them. 25+ wires soldered to the board? Where did you get this thing? I have no clue what I'm looking at. Contact me in private messages. I'd send you a TSOP'd console and some cash for this.

Talked with OP and it sounds like this had a non-MS logo appearing before the hard drive update attempt. That is not particularly important, but it leads me to wonder what bios is installed on this console. Different bios can handle different hard drive configurations.

Perhaps some wire was knocked loose while working on the Xbox? I assume you didn't lift the motherboard out while performing the hard drive upgrade, but rather did so afterwards to take pictures. I don't think it is likely that something got knocked loose while using chimp, but who knows.

AFAIK chimp is supposed to create a drive with identical (but bigger) partitions, so it should not have made some unbootable drive. Or rather, the same files should be present in the same partitions and directories. How much storage does your drive have? I know partitions over a certain size can be problematic.

I have never seen a chip wired up like that.
Chips that don't have a format utility built-in would only need something like Slayers boot disc (or whatever) to setup a new drive correctly.
Unlike softmod you usually don't need to worry about unlock/lock HDD.

Yeah chips will sometimes have a different screen on boot. All the ones I've seen had that anyway.

No idea what this is here. Very strange.

My 2 cents; If this were my XBOX I think I would order a cheap Aladdin mod chip and replace this wired thing. Then you would probably be able to boot Hexen and create a new HDD.

that chip you all are looking at uses oldest 29 wire method, before people found that you can solder chips on lpc
Reactions: deadlegion

JustAnyone said:
that chip you all are looking at uses oldest 29 wire method, before people found that you can solder chips on lpc
Click to expand...

Holy crap, didn't know there was an old method using a crazy amount of wires. I have honestly never seen that. Thanks.
You must log in or register to reply here.