This is something I have been working on/off the last month or two.. NXFLASH. 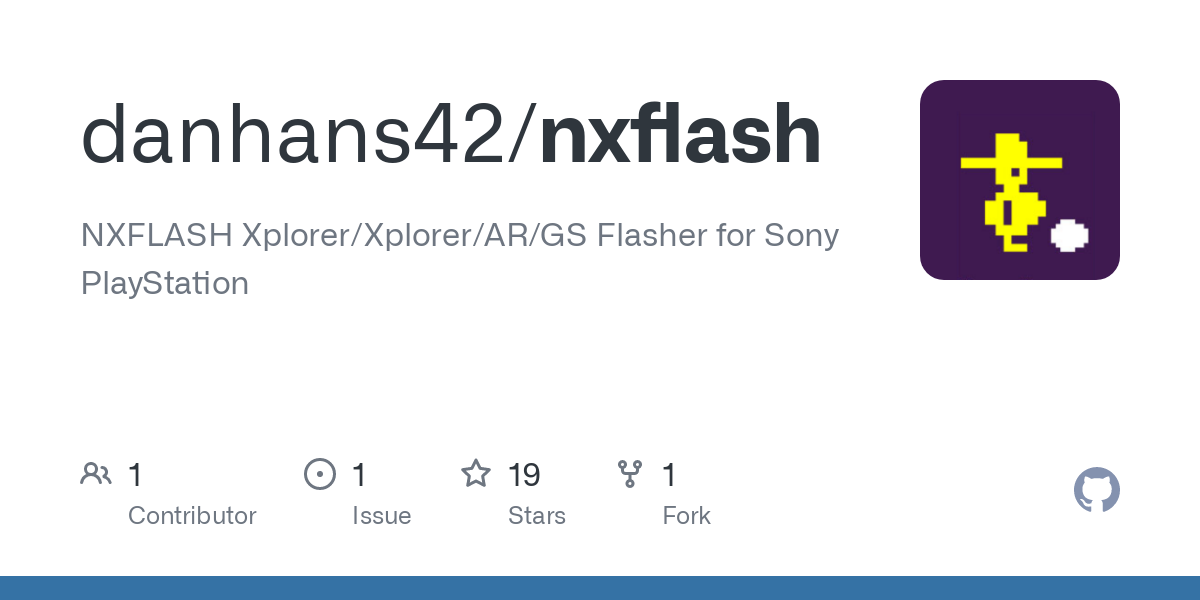 
NXFLASH is built on the source of XFLASH which was written by Tim Schuerewegen some time ago. It allows you to flash/backup cheat cartridges such as the Xplorer/Xplorder/AR/GS etc.

Shadow from PSXDEV.net managed to get in touch with him and he found the source code for it.

I wanted to add extra features and serial compatibility to it and support more flash parts so I decided to give it a new name - it basically means 'next xflash'. I believe it needed a new name as the original author may no longer want to be associated with it and to save confusion about client side tool compatibility.

In order to run NXFLASH you will need a way to execute it on a console. I will not cover that here as plenty of guides are out there for mastering bootable PlayStation discs and booting them. Alternatively, you could execute it using your usual code upload method (catflap/psxexe/psxserial etc.).
NXFLASH also has a Python3 based client for uploading/downloading data. It has been tested on Python 3.7 on both Linux and Windows 10.

Features :-
Its currently working really well, every cart I have flashed with in testing has worked 100%. I have a test version that I have out to a beta tester and will wait to hear back before releasing it.. probably a few days.

To accompany nxflash, there is a tool called nxflash.py (original huh?). Its written in Python 3.x and needs pyserial. The tool allows upload of ROM, and download of ROM and BIOS. It also has support for PSXSERIAL/Unirom v6 if you need to send the EXE to PSX that way.

In essence, that means you can flash your console easily without using a CD other than PSXSERIAL.

nxflash.py examples :-
Its very simple tool, with hardly any exception handling and will overwrite files without prompt, so be careful!

Would like to hear from people who have unsupported flash types so can see about adding support for them.

If you would like to test the beta version drop me a PM. Will hopefully have it released by the weekend, just want to make sure its working for others before release.
Reactions: tmk, Traace, pool7 and 3 others

Very interesting, is this going to be open source?

Eventually yes, just not at the moment. I am very early on with this and want to get all the code commented and tidied up, so its easy to learn from and further improved. It will eventually end up on GitHub.

The source for xflash is already available from http://www.psxdev.net/forum/viewtopic.php?t=1530

Not as far as I know, sorry and its not something I can support

You can use the original xplorer ROM with xlink/xlinkwin.. but I am not sure how well they work with Windows XP and beyond as it was nearly 15 years ago when I last used it under Windows 98 SE.

Latest version is now on github..

nxflash.py - pythion based client is also included - I recommend reading the info on the github repo.

Currently does not support the dual banked Xplorer FX ( 2x SST29EE020 PLCC32 ), if you have one of these carts please do not flash it as you may not be able to recover.

Also, the support for xkiller/LPT connection is still there but unsupported. It should work fine but I do not have a PC set up currently with WIndows that I can test this on.

If you find any little quirks (display not centred etc), please drop me a DM or raise an issue on github and I will sort it.

As well as fixing any issues in the current version I will be looking to add the following features to the next release.


Anyway, hope you find it useful.

Where is the problem?
what does not arrange a method from XFLASH

No idea. Need to investigate it as the routines are exactly the same and remain untouched.

Until I have the correct version of the dual bank FX I won't support it, hopefully will have one soon

Thanks Megavolt. Will have a look at that function and compare with what I have. Initially looks a little different.

Speak to Squaresoft74 or krhacken, they may have a dump of it between them.
Reactions: szczuru

Bit of an update. I don't know if this feature will remain or not but have managed to shoehorn PSX-EXE loading from SIO into xflash. I had to move the internal data buffer for loading ROMS to a higher memory location to get it working, and it currently only seems to work with EXE's at around 1mb.

Not only that, but rather than being stuck at 115200bps, I have got it working at 345,600bps... so its really fast! I also wanted to bake it into a ROM so it could instaboot, which is now working thanks to sickebricks romprod.

See the video below :-

The direction I will now take is that I will make nxflash standalone and release the current sources, and continue to improve it. Then the bloated version of nxflash can be a seperate version. Next feature I want to add is some form of memory card management so we can load EXE's from memory card (probably will use Shendo's mclaunch), as well as memory card reading/writing/dumping.
Last edited: Jul 15, 2019
Reactions: Dedok179, logi26, megavolt85 and 1 other person

Haven't messed with my GameShark cartridge for ages.

In the current version, is is safe to use it to reflash it with some other rom?

Johnny said:
Haven't messed with my GameShark cartridge for ages.

In the current version, is is safe to use it to reflash it with some other rom?
Click to expand...

Thanks
Reactions: Johnny and krHACKen (aka kHn)

If you get stuck or have any questions drop me a DM or reply to this thread.
You must log in or register to reply here.