I call it KOStana

Finally this thing works so I can show it off. Been working on this on and off for a few months now, I'm pretty pleased with how it turned out. I've always wanted a real Katana dev kit, but after years of lusting, I figured I should do something about it. Not content to sell a pinky toe to finance one, I decided I'd build something similar instead. Hence...

Obviously this is not a real mac, nor a real Katana. But this is a fully self-contained, integrated Dreamcast devkit, entirely built from FOSS technologies. This machine is simultaneously a modern PC -- i7 4790k, 16 gb RAM, AMD RX580 short-form GPU -- and a Dreamcast all in one, in the same case, interacting with each other.

This is the dreamcast internals all laid out before they went into the case. The dreamcast is pretty modified. Firstly, I have built a USB Coder's Cable directly into the Dreamcast from the test points on the mobo, the steps to do so are outlined here: https://www.obscuregamers.com/threads/sega-dreamcast-usb-coders-port-tutorial.1041/

This lets the Dreamcast talk to the host PC via a USB connection, rather than using the more common (I think?) BBA solution. I did this, because using a BBA to connect to a development PC ties up the modem on the dreamcast, so it's impossible to write and debug modem software. This is a devkit, devkit aint got no time to play around, devkit meant to dev with. So inside this PC tower is also a raspberry pi, running DreamPi, which the Dreamcast's 56k modem interfaces with, that pipes to the back as a ethernet port. Just plug the ethernet cable into your router and the Dreamcast is online, and you can write and debug online code with the thing.

The GD-Rom drive has been removed from the Dreamcast, and in its place is a GDEmu, which lets the Dreamcast boot directly up into the image of my choosing. On the front of my KOStana tower is an SD Card reader which connects to the GDEmu via a ribbon, so i can easily swap out the image the DC boots into without disassembling the computer. Currently, it boots into @SiZiOUS latest version of DC-Tool-Serial:

Xubuntu has been skinned to look like OSX Aqua circa 1999, to match the entire theme of the Dreamcast. It is running on a modified Blueberry Apple Studio Display Monitor. I say modified, because when I got this about a month ago, it was working, but the flyback transformer on the thing was a bit messed up. When you'd turn on the monitor, it would fill the air in the room with static electricity and sparks would come out. I tried replacing the flyback, and while it removed the static electricity and sparks, it also removed the picture from the tube. Doh!

So, not to be deterred, I pulled the guts out of the monitor:

and Viola! A test of the monitor:

Everything is meant to match. The tower is crystal blue, as is the monitor. A pic together:

Additionally, I have a bunch of other crystal blue stuff that goes together. An earlier pic of some stuff together: 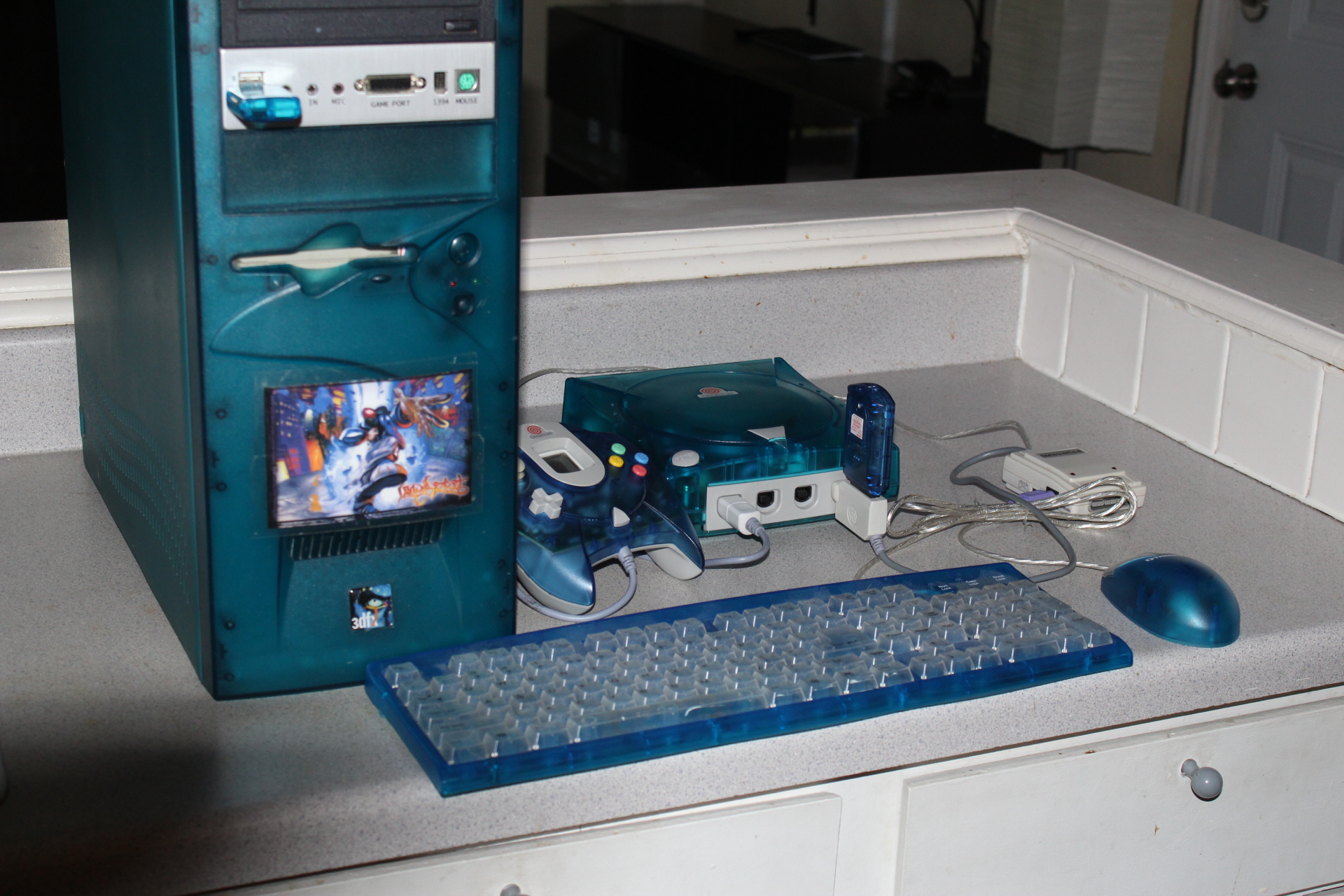 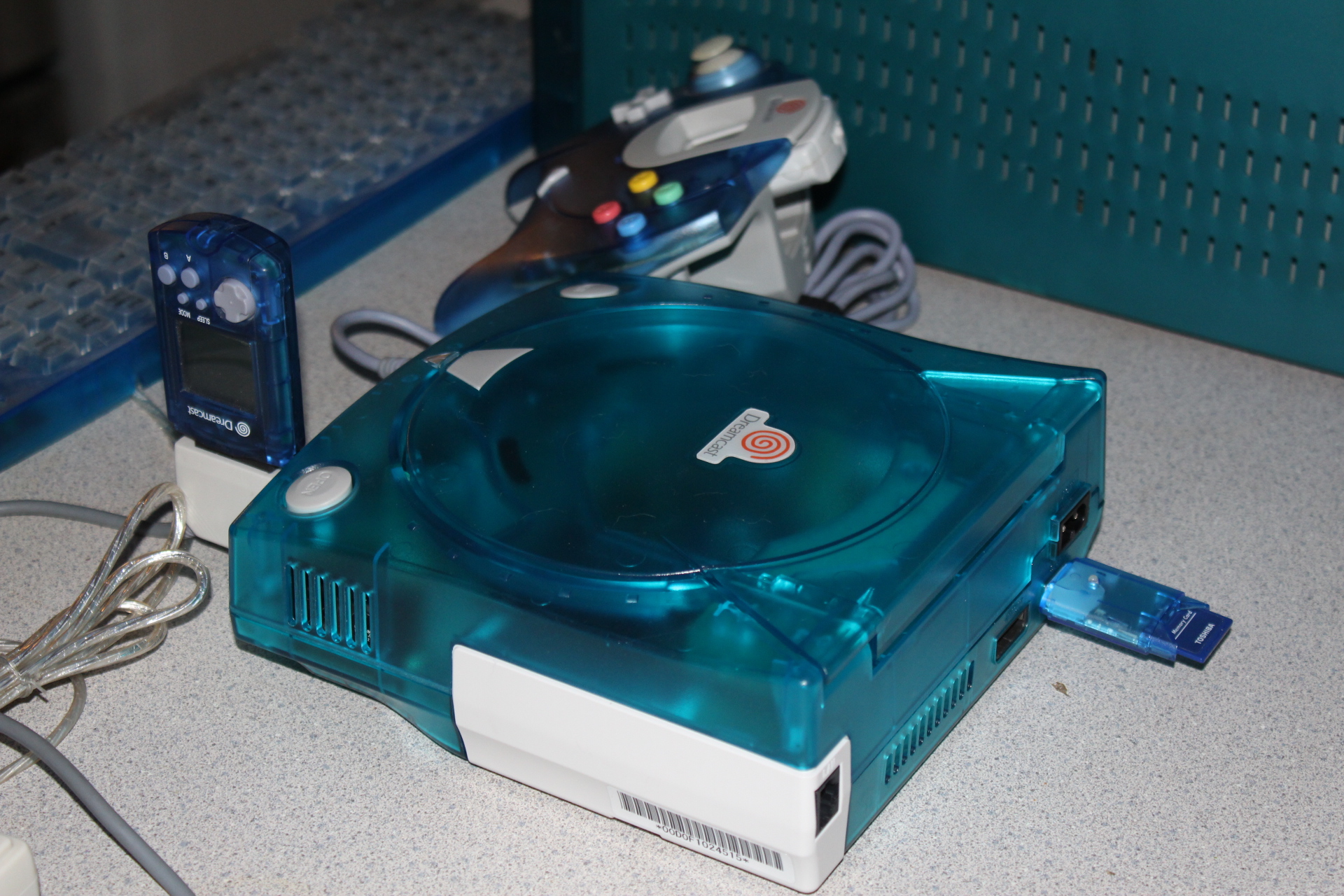 Ah yes, and a second crystal blue Dreamcast, which serves a purpose:

This second crystal blue dreamcast is also a devkit. These are older pics, the white brick on the side is a BBA, which I have since put into it's own crystal blue shell to match. This dreamcast, with the BBA, can be used to debug and develop software for, but the main purpose is to dump GD-Roms if needed. I can use dreamshell or some other application to dump GD-Roms to an SD card, which can then be popped into the KOStana and run like normal.

Ah yes, developing stuff. Aside from Xubuntu being skinned like OSX Aqua, I've also integrated KOS and GDB into QT Creator for a fully GUI IDE:

no janky CLI here, all full GUI. And, if need be, if for whatever reason I don't want to use the dreamcast hardware inside... like say I need some extra advanced debugging options... this also can run gdb through Redream, a linux Dreamcast emulator (notes on how to do so here: https://dcemulation.org/phpBB/viewtopic.php?f=29&t=105034#p1056797

I still have things I want to do going forward. One of the drive bays on the crystal blue tower is open, for example. I want to build a light box for it so that, when the computer is turned on, the words "DREAMCAST" will shine through with glowing light. I'll use my 3D printer to build a shadow mask to do that. But that'll come in the future.

And, of course, what's a devkit without some cool ass software made from it? That's something i'm getting ready to distribute in shortly, I've been working on something for many, many years now. In the meantime, enjoy the kit!
Last edited: Dec 15, 2019
Reactions: Lacemi, Shiva, SiZiOUS and 12 others

wow , this is pretty cool , I like the intergration of the dreamcast

would you mind showing some photos of the internals of the case ? , how the pi , dreamcast & pc motherboard all fit
Reactions: Anthony817

Dans34 said:
wow , this is pretty cool , I like the intergration of the dreamcast

would you mind showing some photos of the internals of the case ? , how the pi , dreamcast & pc motherboard all fit
Click to expand...

I sure will later on today, but right now I'm about to get some sleep. I've been working all night on the monitor. It's a super tight fit in there, though. The dreamcast is mounted to the bottom of the case on risers, and the dream pi is installed in the bay behind the controller port. I'll need to take it apart inside to get some clear pictures or else it'll just look like a mess of wires. I also want to install a fan on the side of the case, as this is actually a pretty old AT case from back in the day that wasn't meant for this. I'm worried about it running hot, so later today when I wake back up, I'm going to take a hole saw to the side and pop in a fan. While i'm doing that, it'll be a perfect opportunity to snap some pics of the inside.
Reactions: Dans34 and hermesconrad

This is fantastic, great job, really well packaged, I love it
Reactions: Anthony817

Damn, I am really digging this project! And how cool is it that you have all 3 systems matching Crystal Blue!? Very exquisitely executed! You get a thumb up from me!

Anthony817 said:
Damn, I am really digging this project! And how cool is it that you have all 3 systems matching Crystal Blue!? Very exquisitely executed! You get a thumb up from me!
Click to expand...

Blue is very obviously my favorite color. That tower in one Pic with the limp bizkit sticker on it is actually the pc I had way back in 1999. I've always loved that crystal blue look, I wanted a blueberry iMac very badly just for the look back in the day. That limp bizkit crystal blue tower was my attempt at building a windows clone at the time haha.
Reactions: Anthony817

The Dreamcast was actually overheating when I was testing it earlier this week, so I took a hole saw tot he side of the case and created some positive air flow with a new fan on the side. It now runs cool without problems, been running for an hour without fault. The fan for the DC:

Also gives me an excuse to take a picture of the Dreamcast piping back into the case through the WinTV card:

Awesome, but the Limp Bizkit sticker... I'm not sure, but it may be so tacky that it gets a pass considering the era.
Reactions: Mord.Fustang

Nully said:
Awesome, but the Limp Bizkit sticker... I'm not sure, but it may be so tacky that it gets a pass considering the era.
Click to expand...

Notice the pc game port and the voodoo 3 badge. It's the actual pc I used from bitd.
Reactions: Arcadia and Nully

finally set aside some time to get my Dreamcast framework up and compiling:

All 3 screens coming from the same box.

oh, also, I installed a light in my monitor:

Loving the OCRemix playlist in the back of the first pic too! This whole thing seems super awesome. Does it have most/all the functions of a Katana dev kit?

supersega said:
Loving the OCRemix playlist in the back of the first pic too! This whole thing seems super awesome. Does it have most/all the functions of a Katana dev kit?
Click to expand...

That's more of a question about how KOS in general stacks up to the Katana or Windows CE SDKs. I'll tentatively say "mostly yes" with the caveat that KOS is missing a lot of core functions that the Katana SDK has, like a built in profiler, and the 3D APIs available aren't nearly as performant (although gldc is really great these days). Good news is that there are a lot of people out there working on building such tools from scratch!

Another thing worth mentioning, since this is built out of a retail dreamcast, you're limited to retail dreamcast memory. So your debugging tools and such have to reside in the same memory space as an additional overhead. So you can't really debug a project and expect the full available memory like you could on a katana.
Reactions: supersega
You must log in or register to reply here.