Lost Sega Dev Hardware/Software - Anyone have or seen these?

Hi all, I'm currently cataloguing a bunch of dev hardware and software for Sega systems. Despite being involved in communities like this one for almost 20 years now, there are some things I can still barely prove existed, some of which as far as I can tell has never been spotted by any collectors. I thought I'd try my luck here and see if anyone else has come across some of this stuff, but maybe doesn't even know what it is or hasn't shared it until now. Maybe someone even just recalls seeing a picture and can track that picture down, this would still be very helpful/interesting to me. Here's what I'm looking for right now:

1. The "Super Mega Drive" development system. This was the original, official development hardware, produced by Sega and made available presumably sometime around the launch. This special Mega Drive had no PC connection, and relied upon a separate ICE unit to do actual debugging, and a DRAM development board to test code, but it did have a lot of extra hardware features on board to assist with development. We have the manual for it here: https://segaretro.org/images/0/00/Super_Mega_Drive_Manual_1991-01-29.pdf

I have never, ever seen a picture of this system. I've never seen anyone claim to have found it. The only evidence we have that it even existed is this manual. Reportedly, there was a serious shortage of dev units for the Mega Drive when it came out (which I assume means this system), and it also probably cost a fair bit, which wouldn't have helped. It seems most developers went the cheaper route of just modifying a retail Mega Drive to fit a ZAX ICE unit, which was a documented route supported by Sega. When better dev hardware arrived around 1991 which didn't rely on a separate (large and very expensive) ICE unit, the original dev hardware was probably largely abandoned even by the people who managed to get it, so this unit was only "live" for 2-3 years probably in the early days of the system. If anyone has even seen this unit, or can find anything else about it apart from the manual above, please let me know.

2. The DRAM-based dev cartridge. We have a picture of this one. For it, we need to go back to the original days of assemblergames:

ZAX Megadrive DEV
See that board sitting on top of the ZAX ICE unit? Here's a grab of it:

That there is the famed 8Mbit DRAM development board for the Sega Mega Drive. It was comprehensively replaced by other options, in particular the "SegaDev" card by Western Technologies in 1991, but this DRAM board was likely used to develop most of the early Mega Drive games. Despite this, that laughably low resolution picture you see above is the ONLY image I've been able to locate of this board. If anyone has seen this thing in the wild, please let me know. Unlike EPROM boards, this thing was 100% volatile. It had 64Kbits of SRAM for save support, which is what you see that battery for, but once the cart lost power it lost the ROM data, so there's no protos sitting on these things. None the less, there should have been a stack of them around back in the day. Has anyone got one, come across one, or can anyone find a better picture of this thing? Based on documentation, I believe the board should be stamped with the PCB ID of 171-5642-02.

3. The official Mega Drive "Hello World" sample program. This is referenced several times in the documentation. Sega produced a basic sample program which demonstrated the hardware to potential developers. This would have been widely available back in the day. Again, from that same old assemblergames link, we can see pictures of the disks, with various different revisions shown here, as well as a "sound sample program": This image is again the only image I've ever come across for these. The content has never been posted. I have a single file from it, "ICD_BLK4.S", which was recovered from source code that's been released from companies/developers, but the rest of the content on these disks is lost to time. Anyone seen these anywhere else, or better yet, have a dump of them?

It is however, not this one. Unlike the one shown here with a bank of four dipswitches, it would have had a single switch of some kind on it, and a 256Kbit SRAM capacity, as opposed to the 64Kbit capacity of this cartridge. Unlike the board above, it also wasn't expandable to 16Mbit, so that probably limited its longevity. That said, there's probably a proto or two floating out there that was on one of these boards, but despite pretty extensive searches I haven't been able to locate a picture of it. Has anyone come across this one, or thinks they might have found an image of it? I don't know the PCB number for this board.

5. Sega MegaCD "Super Target" hardware. This one may or may not have even existed. It's possible the "Super Target" mentioned was actually another name for the "Super Mega Drive" system listed in point 1. That said, there may have been a development system which pre-dated the Cross Products MegaCD devkit shown here: 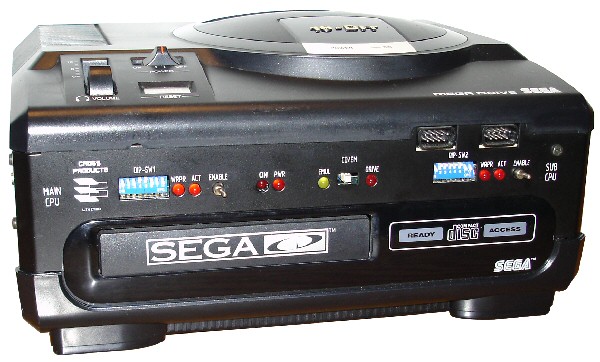 If this other system existed, it probably had a very short life, as the Cross Products unit would have displaced it quite quickly after it was released. Launch titles for the MegaCD however, were probably developed on this mysterious other "Super Target" system.

6. "32X Target" hardware. This pre-dated the 32x CartDev that was reportedly released around June 1994. This appears to have been quite a large mega-unit:

This beast of a system encompassed, the full Mega Drive, MegaCD, and 32x hardware, providing connections for ICE pods for both 68000 and SH2 processors, as well as (presumably) the ICOM Simulations CD emulator card. Never seen one of these, ever, not even a low-res pic, but there's details of it in the 32x documentation. It used the same 171-6692D SH2 CPU mini-board that was used in the Sophia for the Saturn where an ICE unit wasn't fitted, which shows it was clearly quite specific custom hardware, and given the timing it was almost certainly designed by Sophia Systems too. This would really be the holy grail of Mega Drive dev hardware. Although the 32x CartDev paired with the Cross Products MegaCD dev unit would have been more practical for actual development, this monolith custom system would be pretty damn interesting to see. Again, it probably had a limited life, like the 32x itself for that matter, but this one probably only made it into the hands of developers that made launch titles for the 32x. It's quite possible none of these still exist, or only exist in Sega's archives, but I'd love to see a picture of one someday.


That's about it so far. Obviously the DRAM cartridge and software from the images above are/were in ASSEMbler's possession, which I consider means these particular ones are probably lost forever. There should be a lot more of them out there though, that stuff should have gone fairly wide. Some of the other systems may never be seen, and it's possible none still exist, but who knows? There could be three of them in some random guy's garage that he salvaged from a former studio when it closed. As I mentioned, I'm currently cataloguing all this stuff, to present a coherent consolidated set of tools and information in once place. If anyone has any info about the stuff I've listed above, it would help a lot. Thanks.
Last edited: Jul 25, 2019
Reactions: einsteinx2, Gilgamesh, Hokusai and 8 others
You must log in or register to reply here.