N-Gage Prototypes (Hardware - and a bit of Software ;))

Had some luck and was able to add two more pre-launch N-Gage units to my collection.

They require some serious TLC before I can even test (and possibly fix) them, however.
Last edited: Jan 19, 2021

Certainly. Though the real beauty of my N-Gage collection is this:

Here's a picture of the PROTO F 6.0 pcb with all covers removed:

Two more prototype units are on my way, so expect more pictures and videos soon. Hopefully these will play my prototype games, since there are no working cracks available so far and I want to record some footage for YouTube.

In the end, I'm only going to keep one or at most two of the prototype units, however. Not much reason to keep them all...
D

More on that one later. This will also get a dedicated YouTube video at some point.
D

So here's the beauty in more detail.

Apart from a few scratch marks on the back cover, it's in mint condition.

It's a V4.0 Made in Japan 2003-01-23. Unlike later prototypes, this one has some differences. Notice that there's no Bluetooth antenna and also the section right from the SIM connector is different. Like most prototypes, it only has 8 megs of RAM.

Unlike retail units, it does indeed play the prototype games I have in my collection. That's what I was hoping for. Already played Taito Memories for an hour or so. Going to prepare some video footage...
D

Just noticed that I forgot one picture.

Welcome to the future...
D

Early POS boxes from July 2003 tailored to the German market:

Not a prototype, but kind of a forgotten N-Gage game: Trivial Pursuit.

World class software services and consultancy for 2, 2.5 and 3G.
web.archive.org 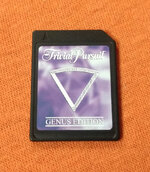 The N-Gage was my very first cell phone. Memories...

So, it's interesting for me to see prototype stuff like this.

We (Super Fighter Team) actually produced a game for the S60v2 series (including N-Gage, naturally): Super Fighter Block Battle. We initially had plans to sell it, but ran into development delays concerning the Bluetooth 2P mode. By the time we had everything all figured out, and the game completed, the market for v2 had completely eroded. So! We released it for free.

Anyway, please keep sharing info & photos as you have time, it's cool.
D

Nice. So basically Super Puzzle Fighter II Turbo just without the Street Fighter II stuff..? Certainly going to try it, though N-Gage is S60v1, not v2. It's probably not going to work on the N-Gage when an SDK newer than v1.2 was used.

You could still sell it in physical form in low quantities. There should be enough N-Gage fans out there to sell a hundred copies or so. If you ever decide to do and need help designing a box inlay, let me know.

Not exactly. It follows the rules of Tetris, and you can deal damage to the opponent when you clear lines. So in this way, it's possible to win or lose based on either filling the screen with blocks or depleting energy. Players can regain energy by clearing lines using special blocks.

The N-Gage was our primary test system, since it and the 3650 were the two Symbian phones I owned at the time. So I can assure you, the game most definitely runs perfectly on an N-Gage. If you do give it a try, please share your feedback.
D

Will give it a try later this day.
D

Just gave it a quick test - very well done! I only found a few small issues:

1. intro music sounds strange. It's very slow and has pops/clicks. Maybe intended, but doesn't sound right to me. (tested on a QD)

3. on the N-Gage, it feels odd to rotate the bricks by pressing up. It should use 5 and 7 and thus also allowing rotation in both ways.

Apart from that, it's a nice game and certainly fun to play.

btw, may I suggest that the ZIP download should contain the already-installed game files and not just the SIS, which kind of beats the point of providing a ZIP file as an option to the SIS installer..?

Thanks for trying, I'm glad you're enjoying it. To address your comments:

1). I don't recall ever hearing any pops in the music, testing on ~4-5 different Symbian phones of the time. But I never tested on QD specifically as I never owned one. It is a slower tempo song than most of the others, I can confirm that much. Was slower to set the "downer" tone of the story.

2). I agree about the slow transition time.

3). I don't recall enough about the controls as I haven't played in years, but we found them serviceable enough to play through to the end.

4). The ZIPped installer was provided because many web browsers of the time, by default, tried to display a SIS file as if it were a web page, rather than opening up a save dialog. It's mainly still offered as a ZIP in case someone's using an older and / or more simple browser.

Being the first fully original game I ever produced, it's far from perfect but I'm still proud of it, and it's nice to have someone playing it all the way into 2021.

I'm going to have to give this a try!
D

Mr. Sound-About said:
1). I don't recall ever hearing any pops in the music, testing on ~4-5 different Symbian phones of the time. But I never tested on QD specifically as I never owned one.
Click to expand...

Tested on a non-QD as well now. The pops are there as well, but less noticeable. From what I can hear, it seems it's not really music but just separate samples that you play in order with delay between them. There's a noticeable (for me) pop or click at the end of most samples. But this could also be a general issue with sample-playback on the N-Gage.


Mr. Sound-About said:
3). I don't recall enough about the controls as I haven't played in years, but we found them serviceable enough to play through to the end.
Click to expand...

It certainly doesn't mean the game is badly playable, but it's like with jump'n runs that have you jump by pressing up instead of using a button.

If you could rotate clock- and anticlock-wise using 5 and 7, it would not only make the game feel more like a real N-Gage game, it would also make it easier (read: better) to play. It's quite hard to move the block left or right while rotating at the same time, and since you can not press up and down simultaneously, there's no way to rotate the block while having it fall down fast. Your computer-controlled opponent does not seem to have that same limitation.
You must log in or register to reply here.
Share:
Facebook Twitter Reddit Pinterest Tumblr WhatsApp Email Share Link