N-Gage Prototypes (Hardware - and a bit of Software ;))

derSammler said:
From what I can hear, it seems it's not really music but just separate samples that you play in order with delay between them.
Click to expand...

In fact they are just 4-channel Amiga MODs, so definitely sample-based.


derSammler said:
it's like with jump'n runs that have you jump by pressing up instead of using a button.
Click to expand...

Got another game yesterday that apparently saw a release in Norway Finland only: 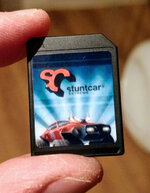 Stuntcar Extreme by Fathammer. Like Trivial Pursuit, it was not published by Nokia and hence never came in an N-Gage styled box.

May do some gameplay footage of that as well, but it's dumped already and most people who are into N-Gage know the game for sure.

Nice enough find in case of StuntCar Extreme. Not the most common S60 MMC game. FatHammer mostly preferred to release their games as digital retails, officially splitted in few .sis files + instruction/legal notes file. Back in time I bought all their retail games from official site. MMC version possibly the same, but already provided as a System folder. But also build may be a bit earlier too (that's normal practice, 'cause even back in time 3rd party S60vX games had offline updates as standalone SA .sis files or PU .sis patches). As I remember, official digital SCE version is v1.00 (based on information provided by official .sis pkg files). If U can upload here dump of this MMC, I may check official creation date, based on .app internal creation date/time. I have some internal S60 tools for that.

Also, as I remember there was guy, that created a nice cover for the SCE box and MMC, around a year ago. Without the compliance to all N-Gage official guidelines etc... but still nice to print and to set on the shelf. I don't sure why, but he deleted his initial post already. I back-uped the original files (unlike U with your heavily ripped custom pics in bottom thread, he was nice enough to upload original full-scaled work ) , so if someone also still have original digital SCE version or loose SCE MMC, may feel free to make for himself a physical variant, for the comfortable shelf-preservation in original N-Gage box. 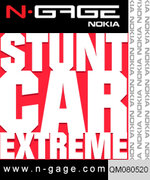 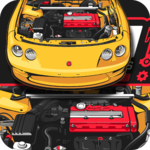 Have to say that Stuntcar Extreme is actually a much better game than what I did expect at first. It's very similar to Glimmerati in that you can talk to and compete with the other racers. You need to win races and earn (stunt) points to advance in the game and get better cars. Track design is nice, too. I'm certainly going to do a gameplay video. If someone hasn't tried that game so far, you should certainly do! 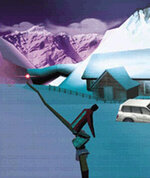 derSammler said:
Have to say that Stuntcar Extreme is actually a much better game than what I did expect at first. It's very similar to Glimmerati in that you can talk to and compete with the other racers. You need to win races and earn (stunt) points to advance in the game and get better cars. Track design is nice, too. I'm certainly going to do a gameplay video. If someone hasn't tried that game so far, you should certainly do!

There is not a whole lot of information to be found about Stuntcar Extreme for N-Gage. Does it run smooth?
Apparantly, this game was also a pack in for the Tapwave Zodiac. Not sure if it's the exact same cartridge though...
D

The Zodiac is a completely different device. Certainly not the same cartridge. I think there was a port for the Gizmondo, too.

The game runs mostly smooth. Only if you are very close to an opponent's car, the frame rate drops. But it always stays playable.

I should have some gameplay footage ready this weekend.
D

Sorry for the reflections on the display. I don't have a polarizer for the lens I used.
B

derSammler said:
Also, with some luck, I can provide a firmware dump of a NEM-4 prototype soon. (a real dump, not just a copy of z: )
Click to expand...

That did not work out, sadly. The prototype I sent in for dumping the firmware refused to switch modes, so dumping wasn't possible. I should add that the unit did not boot anyway, but it was still able to communicate with a flash box.

The fully working prototype units I own are of too much value to send them around. So, anyone knows of a S60/Symbian tool that can run on the device itself and simply dump the firmware to a memory card? I assume that's not a hard task to do, so such a tool should exist. I couldn't find one, however.
B

We succeeded, but the dump was done on a retail device
D

Okay, proto firmware has been dumped successfully. Did versions 1.95 and 2.54. Not sure yet how useful these dumps are. Have to check if they can be used to re-flash a broken unit.
B

They are definitely suitable for an emulator, otherwise I'm not sure.
D

I don't care much about emulation. I want to make sure that the dumps are useful for fixing broken prototypes but at the same time can not be used to create fake prototypes. Once both is confirmed, I'll provide them for download.

There no need any extra confirmation. N-Gage (NEM-4) and QD (RH-29 / RH-47) just normal WD2 platform S60 Nokia smartphones.
And can be flashed only with original service FW DPs, 'cause after flashing process, already loaded FW binds to the HW/IMEI of unit where it loaded.
So, in case of original S40/S60 Nokia smart/phones, no any kind of FW dumps could be used to revive dead/blank (Lite SWAP) units.
That's why any alive Nokia Prototypes, especially builds of unreleased models cost so high - 'cause each unit is unique.

So, one more time, if to be short, dumps can't be used for fresh-reflashing, and even can't be used if U'll wipe-out FW of your own units.
Only plus of that data - just for possible (EKA2L1) emulation. But even here no any great profit, 'cause in EKA2L1 already using QD DEV Kit FW dump, and as I remember your units are loaded with just Pre-Retail FW (same as few my early PROTOTYPE Classic on various HWiD stages), not Dev FW with extra DeBug / TEST pre-installed apps like in GD devices.

So that's a +- close to zero affect for emulation / possible restoration already, whether U'll post that dumps or not.

P.S. Also, lower your expectations BobTop, no one remember to DerSammler previously shared anything related to N-Gage SW/Media, even from useless data. So 99.(9)% sure, even my words or words of another Symbian specialist will be valuable not enough to calm his "anxiety", ha-ha.
Last edited: Feb 9, 2021
D

Just noticed while checking the dump of 1.95 that SYMBIAN_DUMPER.exe did throw an error:


Code:
It did not create the ROOT dump because of this. Any suggestions? The resulting BOOT dump on the card is 4 KB - I'd guess it tried to dump 8 KB without checking if the ROM really is that large (which it is not on that device, apparently).

//edit:
Nevermind, seems not much of an issue. After comparing the dump to 3.03 and 3.30, the BOOT dump is good and ROOT is part of the main ROM in 3.03 still. Going to have it flashed for testing soon.

derSammler said:
Not sure yet how useful these dumps are. Have to check if they can be used to re-flash a broken unit.
Click to expand...

Didn't work. Device will not boot after flashed with the dump. May do some more investigation once I have a working flashing rig myself.
B

There might be a way. A Twister flasher is on the way to me so I can mess around with it myself soon.
D

derSammler said:
There might be a way. A Twister flasher is on the way to me so I can mess around with it myself soon.
Click to expand...

And there it is. 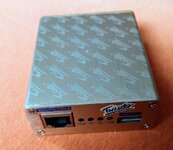