Personally, I never tried formatting via the scsi card... not even sure if it's supposed to work...
N

Hi everyone, sry about the lack of feedback und updates. I took a longer break over Christmas, but wasn't lazy.

Set5 problems still remain the same though, so next step which I hoped could be avoided is to replace all caps.
But I tried everything by now, replaced the SCSI fuse, even bought a new Win98 PC as I thought maybe the problems came from my connected system and not the Set5 itself. Sadly that didn't help either, but hey, I got a new cool old new PC now

Replacing the caps is basically my last idea, after that I need to approach the problems from a new angle...

Good news is that at least the set4 is now fully up and running, including the attached Dev-PC and SDK: 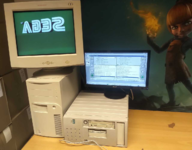