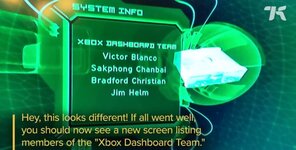 The steps to produce this easter egg are as follows: (via Kotaku)
A pretty minor easter egg overall, but it's amazing that there's still secrets left hiding in the Original Xbox, even 20 years later. There's still at least one more easter egg that has yet to be discovered, which you can read about in this thread on Obscure Gamers.
You must log in or register to reply here.
Share:
Facebook Twitter Reddit Pinterest Tumblr WhatsApp Email Share Link