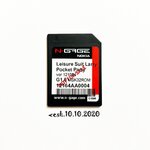 Official Description:
Gamers assume the role of Larry Lovage, nephew of the original Larry Laffer, and are immediately challenged by Larry's lack of social skills, charm, style and luck.
In Leisure Suit Larry: Pocket Party, players explore an extensive and highly detailed 3D college campus, while solving puzzles and engaging in risque activities.
As they search for the ultimate good time, gamers bump into Rosie Palmer, the head cheerleader at Larry's college.
Attempting to win over Rosie's heart, Larry is thoroughly embarrassed by her jock boyfriend Chuck Rockwell.
Humiliation never stopped Larry before and he is determined to do anything to be with Rosie.
Leisure Suit Larry: Pocket Party features more than 30 hours of gameplay, 10 outrageous characters, and non-stop steamy dialogue and situations.
In addition to Larry, Rosie and Chuck, players will encounter other hysterical personalities such as Loosey, the hot, manipulative cheerleader,
Nigh T. Mishons, Larry's soda-guzzling, video game playing friend and Professor Drew Barringmore who prefers letting it all hang out.
Leisure Suit Larry: Pocket Party offers gamers the opportunity to test their social skills against others via head-to-head Bluetooth multiplayer gaming including up to four turn-based two-player mini-games.

Leisure Suit Larry: Pocket Party was planned as exclusive N-Gage Point-and-Click Adventure title from LSL series developed by TKO SoftWare.
This LSL Build was over the responsibility of TKO Dallas. Development of this LSL game was restarted a couple of times, in attempt to create the game that as Nokia Games Publishing board of directors believe would be suitable for all ranges of N-Gage players. Eventually, both Leisure Suit Larry: Pocket Party versions (From TKO Dallas and TKO Santa Cruz) were closed and the LSL game for N-Gage was cancelled.

At the moment, there are no plans/permissions to send the game data to the public access. But some interesting extra content related to this title will be released close year (most likely) or two, if all will be fine. Sadly, in our actual reality is a bit complicated to do a really distant plans. Just thought, that it was important to say to all LSL fans that this game wasn't completely lost in time.

P.S. As usual - using of all my information above in personal non-commercial purposes is free to anyone, but only in case of saving original author nickname (DirkDagger/eskMaemo) and link to this my ObscureGamers thread. With any questions/suggestions - anyone may feel free to write me a PM. Thanks.

So you have a strong desire to make a copy of this game?

Will see how the situation will develop. But in overall - yes, will be good to finally make it available for public in the future.
Atm, I'm focused to found and restore the most complete build of that game. As far as I already found out ,
there still exist at least Release Candidate of Dallas and Santa Cruz build. Will be really good to preserve 'em also.
Reactions: HermitTheHog
B

Interesting copy protection in this game. Can I watch it?
B 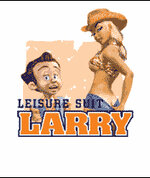 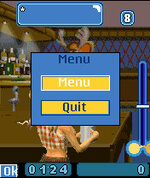 These are screenshots from J2ME LSL games and not related to N-Gage (Symbian S60) LSL: PP.
As for the copy protection, sure U can check it. It is 1:1 the same one, that was used in Call of Duty and TEST: ShadowKey.
Nokia used the same one in close to all of their N-Gage titles. So, feel free to check that ROMs.
They could be found at Archive.org in NO-iNTRO ROM sets.
Reactions: HermitTheHog
B

And when will the licensed copy of Leisure Suit Larry: Pocket Party be added?

Sadly I can't understand what U want to ask. As abt all I wished to say abt the game at the moment - that can be found in first post.
If U want to read more information abt NotForSale N-Gage games, please check that my article, there's a good explanation abt MMC types.
All that Development MMC cards are official and licensed, just originally they were not intended for the public access. Small update of main LSL PP information I wrote here in first post. Since that time, user Mupf already wrote a pretty good article about the game in general (link in a post above), but the so-called "Bonus" part is a fake/joke. So it has nothing to do with the original development of LSL PP. 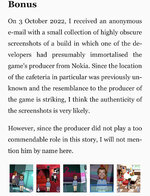 Mupf received an anonymous message with my 50 screens that I made as a gift for Stephen Emond's "Sierra Collector's Quest" book series. The extra 5 screenshots from the so-called "Bonus" part were created as an internal joke when a few of my friends and I figured out how to take screenshots from this game in general. Because the original build I have on hands is an Alpha MMC and it using up all the N-Gage available free RAM, so didn't give the ability to take screenshots from internal or third party screenshotters. Since that moment were created some internal help and experimental tools, incl. one that gaves an ability for ingame graphic swap. So, Mupf also got some of that internal screens from someone in our team, and next basing only on his thoughts he invented an explanation for them. Here’s small video that shows that mod live:

In the end, one more time, it's not an official data, it's just internal proof of concept tool. So, it's just some extra explanation for all who cares.
Reactions: guitarking123xyx and ItsMeMario

As a real Bonus, here are a few minutes of original untouched vanilla Alpha ROM gameplay.

Reactions: guitarking123xyx and ItsMeMario
You must log in or register to reply here.