Most fans of the Bond video games may know the story; that Pierce Brosnan's likeness was originally intended to be used in 007 Agent Under Fire until being replaced with an original design. Carry over from its history as a remake of 007 The World is Not Enough or not, the fact remains that even John Cleese made it into early versions of Agent Under Fire until being replaced with a similarly generic/original design to James Bond himself. That can be seen clear as day in this screenshot: 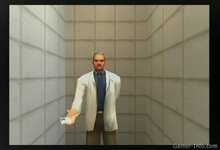 It's difficult to find footage of a time when Brosnan's likeness was implemented, but trailers of the character in shadow may be evidence of them hiding the model before the new rendition was completed: 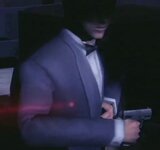 All that being said, for whatever reason Brosnan's likeness was in fact cut... but lately I've been digging into this game for my own enjoyment, and came to a bizarre conclusion.

The multiplayer map known as "Escort" features a unique match type where players go head to head to protect or eliminate a certain VIP. AI bots are unavailable here, even in the Gamecube and Xbox versions, but the VIP does take the form of an NPC character that boards and exits a train over and over. For years I saw this VIP as "some old guy," but recently I stopped to take a good look at his face. Hidden beneath the grey hair and black-framed glasses is something very interesting indeed. 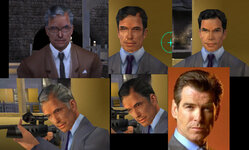 ...Is that Pierce Brosnan in disguise?

I used Photoshop to apply a quick blackness to the hair in the middle images, but even without it there is a slight resemblance in my opinion (at least from certain angles). The texture is even strangely realistic/detailed compared to all others in the game. My theory is this was the Brosnan face texture, but the team kept it in and tweaked it just enough to avoid the obvious connection. It wouldn't be the only face reused between characters; Zoe Nightshade and the Jackal actually have the exact same face, but recolored slightly.

I went as far as replacing the normal Bond face texture (seen top right) and making an Action Replay code (only Gamecube NTSC for now) to swap Bond's face on the Escort map:

I'm in the process of making more codes for the game on my page, but this is just something really interesting I got sidetracked with. Curious to know what some of you think.

My other codes will be here, by the way:
Timeless Lunchbox
Last edited: Dec 30, 2021
Reactions: GiroNeko, NikeX, XBOX and 4 others

Interesting. I would hope that wasn't supposed to be him, because it looks nothing like him.

Very possible that it never was. Just something that seemed like a possibility to me. At least in the first and bottom images there seems to be a resemblance in my opinion. The upper middle image, not so much. However that's what lead me to believe that perhaps it was a Brosnan texture that was altered. Suppose we'll never really know, either way.
Reactions: Americandad

Surely possible the polygon model was originally for Pierce, but like I said those textures aren't really. My view is kind of meh on that, because they had his likeness for Nightfire, a great game, but the voiceover was terrible.

Yes, agreed the voiceover was not good for Nightfire. I thought even the earlier soundalike they had for Tomorrow Never Dies and TWINE was better. Not great, but at least sounded somewhat like Brosnan. Even in terms of visual likeness I don't think they really nailed it until Everything or Nothing, when they luckily finally got his voice as well. Side note, but From Russia with Love's Connery was basically flawless, too.

But yeah I won't argue the point about this particular face texture too much, since it could be absolutely untrue there was ever any connection to the Brosnan version of Bond anyway. I personally believe there might be something to it, but either way I do think it looks more "Bond-like" than the final face they went with (top middle image versus the top right). However the final face does match the visual style of the game more, and AUF's Bond reminds me more of the Roger Moore era anyway, both in appearance and personality.

Have you considered looking at the GameCube demo of Agent under Fire, as there may be some textures leftover there.

You can also see a quick glimpse of the VIP at the end of this pre-release video around 3:45, and this is the same video with Cleese as R in Night of the Jackal.

there were also 2 releases of AUF on PS2 and Xbox. perhaps there are minor differences between them?

I seem to recall in one of the versions (or demo) you can also get a sniper rifle and get a real good look through the shower steam before the cutscene with Q plays for a fun developer mistake .

And unfortunately, I don't think Brosnan was intended for AUF, because even in the early previews of 007 Nightfire, they used "generic bond" - so I think this is a strike against your theory of Brosnan appearing in AUF. You can see this at about 0:30 in this video -
Reactions: TreblaYevrah

Haven't seen that E3 video of Nightfire. Nice. Some more remnants of "generic Bond" can be seen in the GBA version of Nightfire as well, where they used older versions of the cutscenes (in still images).