back in the days of the year 2002 there was some games on local TV stations, that could be played by sending SMS to a premium content provider.

This is about the game beeign called "Astronaut".

RedLynx, known for the Trials motorbike games was behind it.


Katapult was another title :

VADIAN.NET has a wide range of state of the art Premium SMS TV applications.
www.premiumsms.tv


Just recently I learned that there was an additional Nokia S60 symbian app, that could be used to play the TV game "more easily".

Now I do know that I was after this 20 years ago and I learned that RedLynx never released this to the public, but only licensed it to TV stations.


Maybe things changed ? Maybe someone could rescue the Symbian app at least ? Hope to hear someone else here has at least heard of it.


Basically you sent an SMS with coordinates to shoot rockets or rotate your spaceship, which otherwise would crash or get hit by others.
Quite expensive, but I always dreamed about beeing able to play this game at a local PC with 2-4 players. 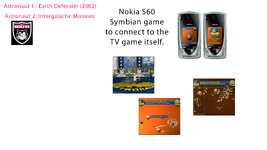