Since my Retro-Bit Sega controller megathread is about to die over with Assembler, I just wanted to continue the thread over here.

They have shown off the prototype of the new Dreamcast controller which will have a hybrid design of the Dreamcast controller with a PS4 thumbstick, the Saturn D-pad, and 6 face buttons. They do plan on a dual analog wireless controller in the future as they made clear on Twitter last night. Will release 4th quarter of 2019 TBD for a retail price of $29.99 USD. 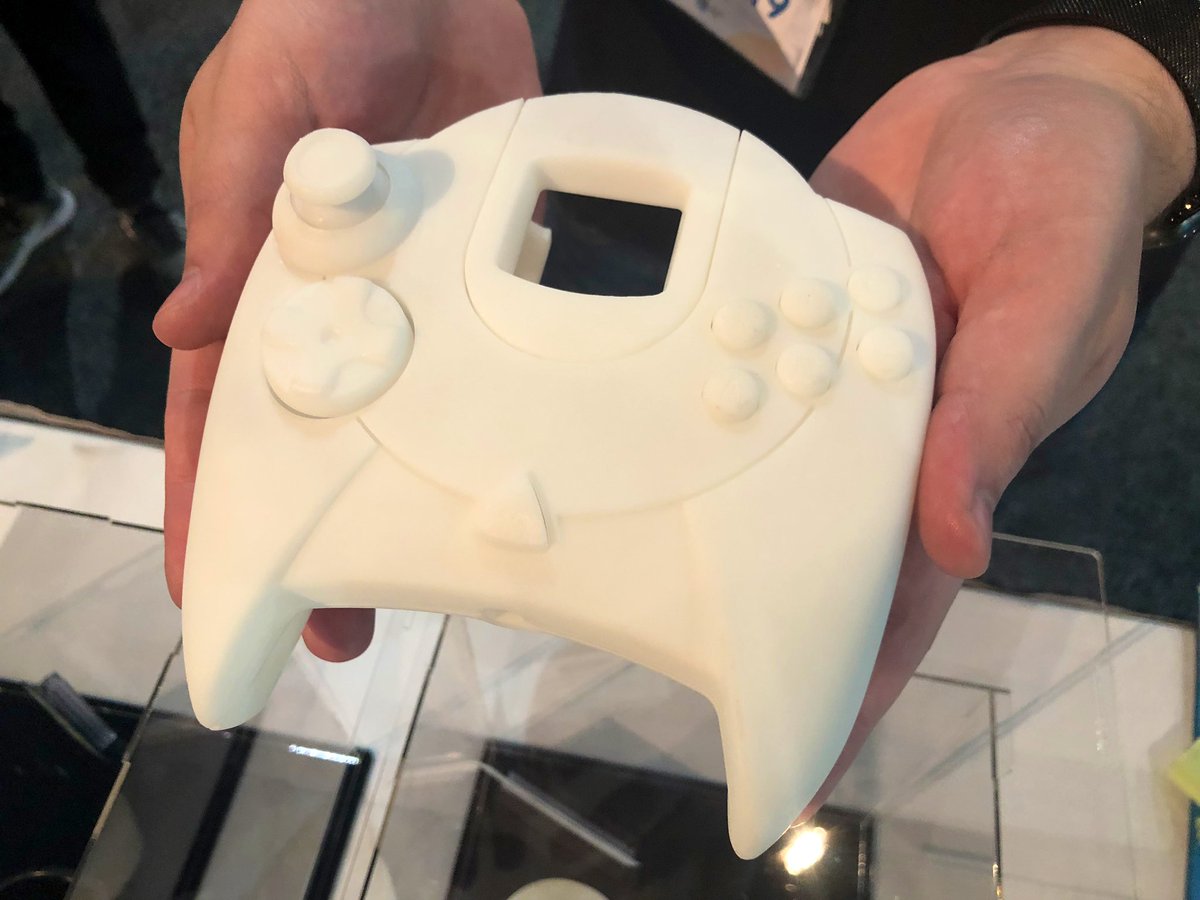 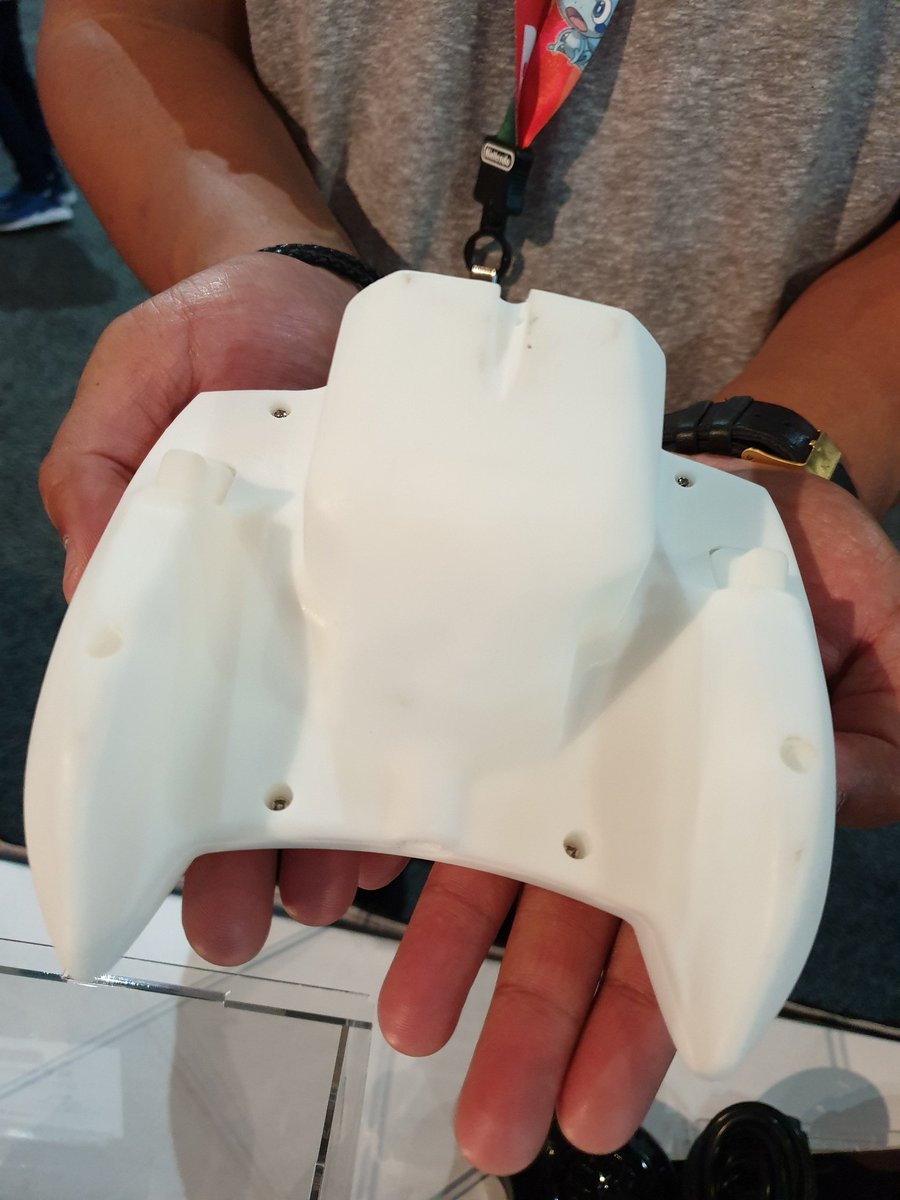 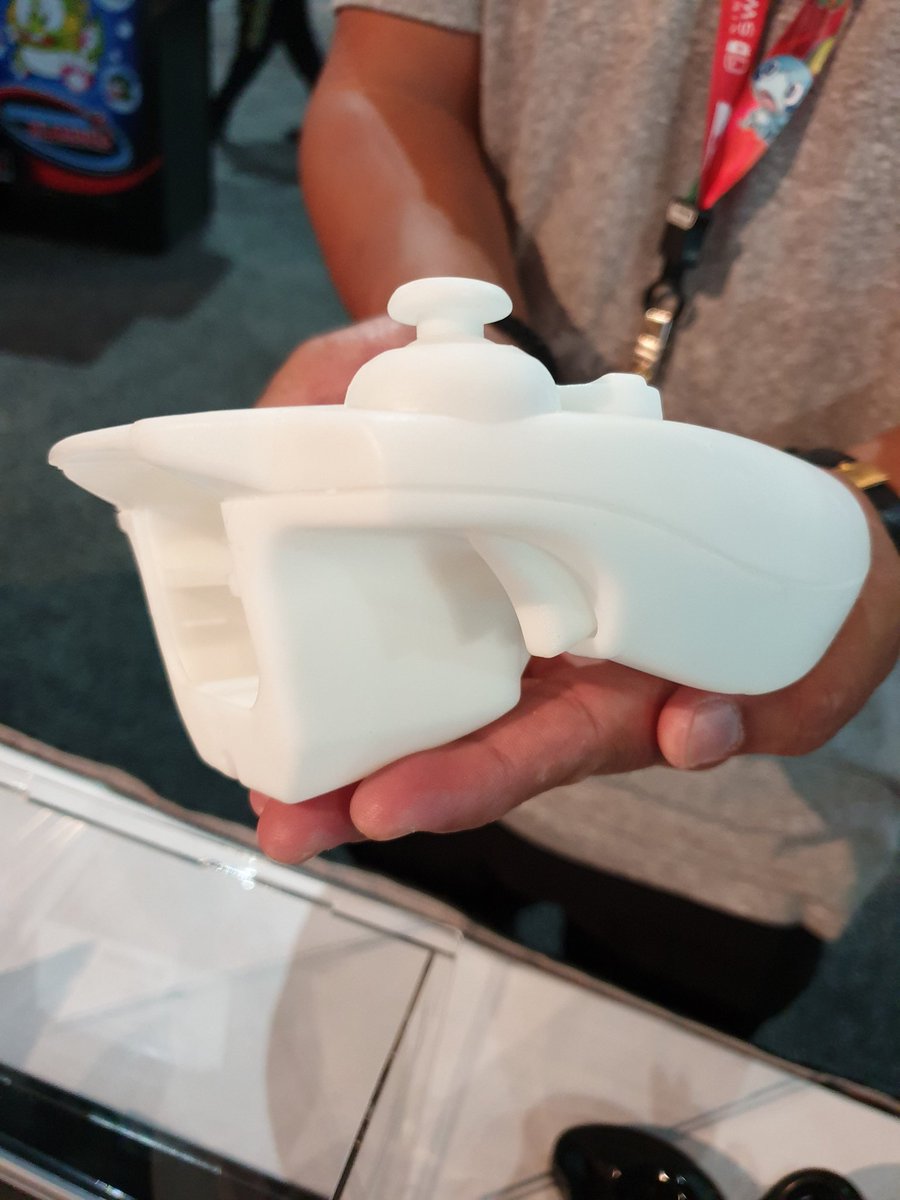 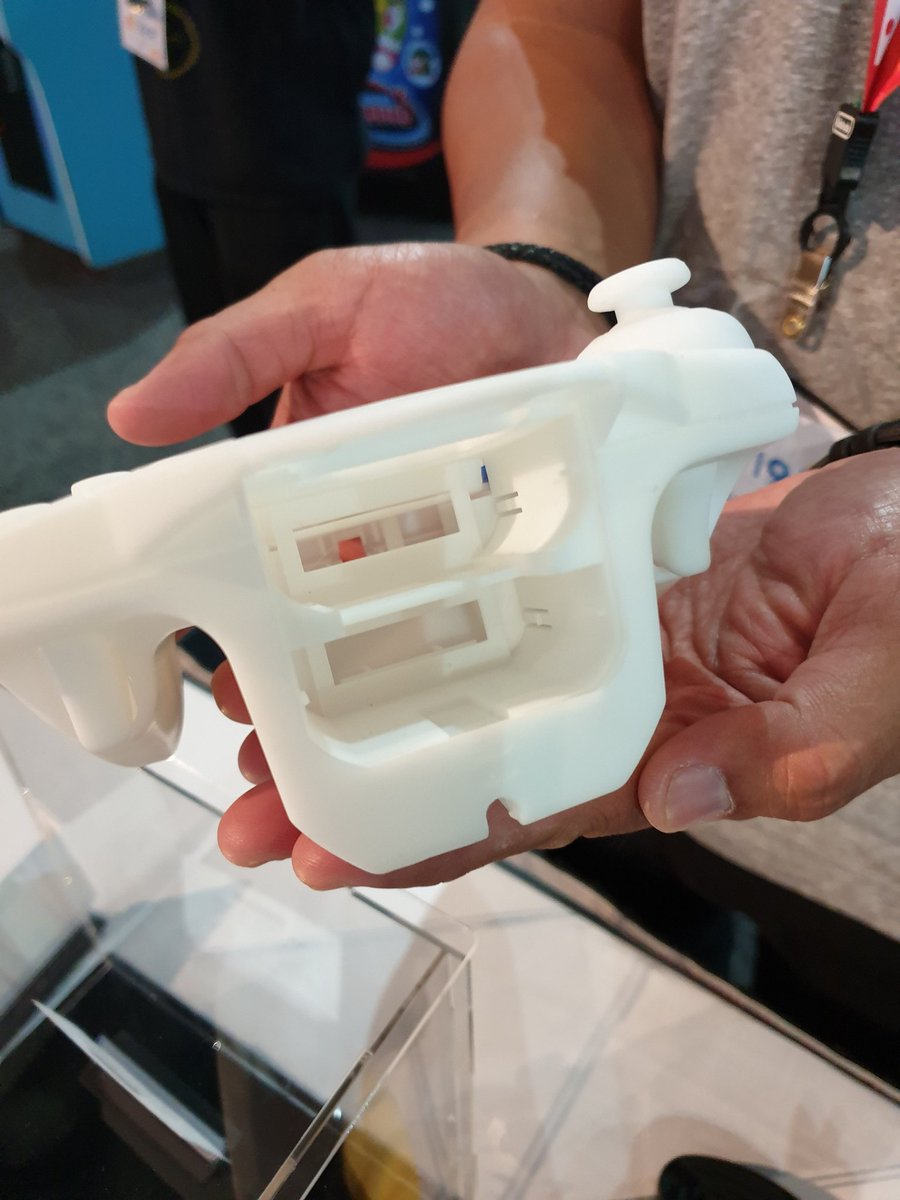 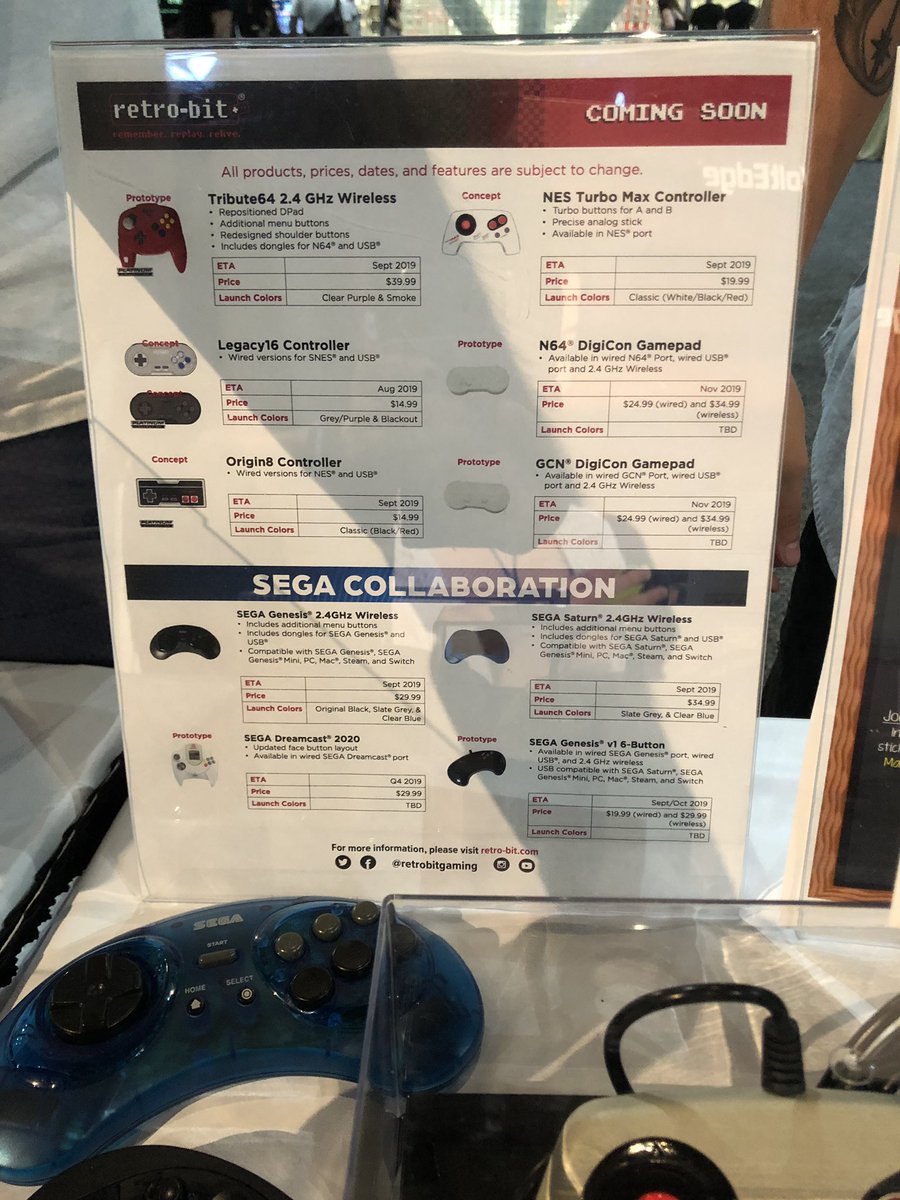 Dreamcast with a Saturn D pad?? Damn that sounds amazing. If it feels the same as a real Saturn D pad that would be awesome
Reactions: Wanderer of AG and Anthony817

Yeah, so long as they can iron out thier damn manufacturing materials. Early reports are that they still have issues with the plastic rocker part being too brittle and breaking on the Saturn D-pad on the controller for that system, but they did say they were working on a second revision with better plastics. So hopefully by the time this one comes out it will be worth it.

Edit: I just want to give a shoutout to @Bad_Ad84 for taking these extra photos for me at E3! Much appreciated!

I thought they did a prototype in early 2018 with wireless Dreamcast Controller. What did they scrap that? I don't understand what happened to those?

Those were only ever empty boxes, and they never actually released anything since then up til now. That is why these are such a huge deal, as it is our first images of the final design. They are making a hybrid one for us instead, and presumably also a dual analog wireless version later on to match with their Mega Drive/Genesis and Saturn wireless dual analog pads. 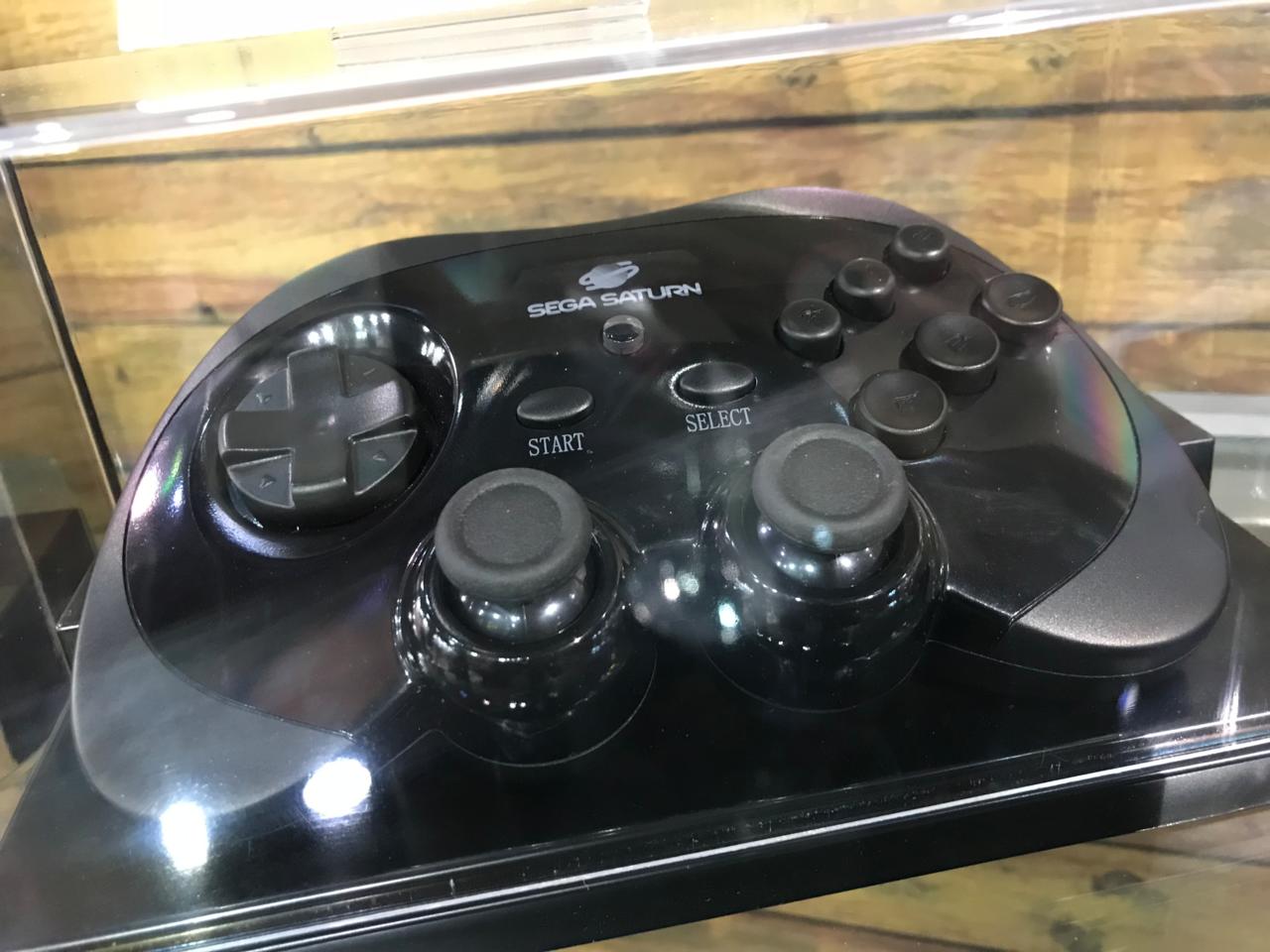 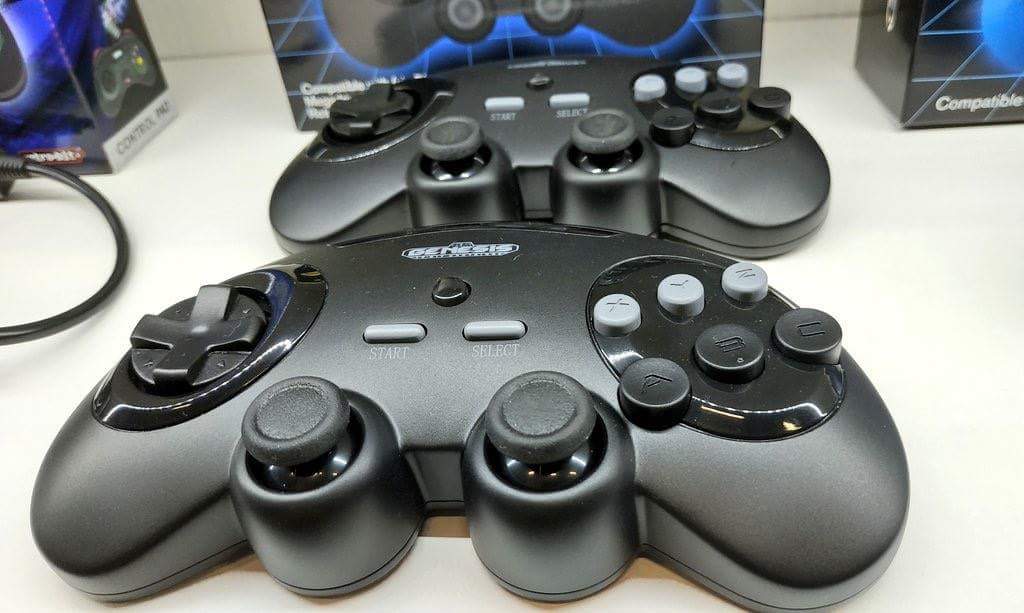 Edit: I spoke with them regarding asking about if dual analog wireless pads will be coming, and they had this to say.

So basically they are still waiting on approval from Sega on the go ahead for this design.

Double edit: So looks like they say they are aiming for a September release for these!

Any info about when they're gonna sell the Bluetooth dual analog quad triggers Saturn controller?

Most likely once the wired DC controller is out. My thinking is that they wanted to get the basic designs of all controllers done first, and then will focus on on the wireless later. On Twitter they alluded to sometime after these designs are released. They also said this is pending approval by Sega for the DC one.

They had planned for the dual analog Saturn and Genesis/Mega Drive controllers to release sometime towards the end of summer, but I think that is unlikely now. I am also super excited for that Saturn pad almost as much as the planned one for Dreamcast.
Reactions: Plavix
D

Yep, they confirmed that around sometime last year. So the Saturn pad will 100% sync up to their DC dongle et vice versa. That is going to mean that if they can fully iron out the quality control issues when these do come out, they should hands down be the ultimate Sega controllers. Over at Assembler some of us were discussing the possibility to edit the executable of games to hack in right analog stick aiming, and making left stick for strafing in FPS games, thus freeing up the face buttons for more common controls like action and jump or reload ect.

The maple protocol does actually support another analog stick called joy2 or should, plus in an interview last year the father of the Dreamcast itself Bernie Stolar discussed that it was planned to bring over a dual analog controller similar to what Sony did, but he got fired before it was ever implemented and the system was also killed off before they reached that point. But it actually should be able to handle an extra input via hex editing one would theoretically imagine.

"I also pushed hard for a dual joystick controller, similar to what we did at PlayStation. There’s a reason the DualShock is still used to this day." 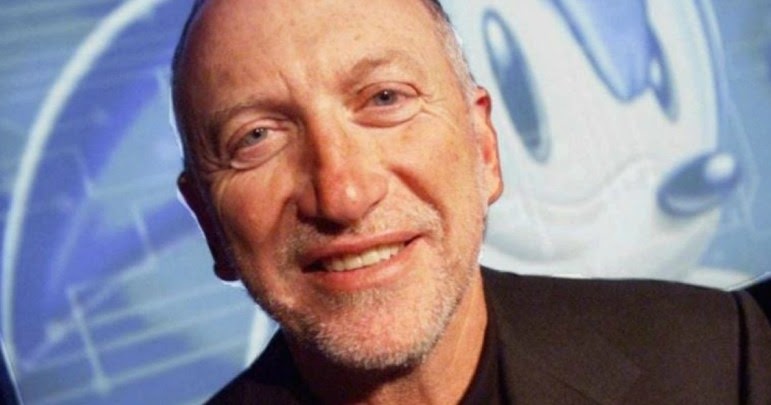 An Interview With Bernie Stolar

So maybe him pushing for it, and the functionality being built in already will benefit us with these updated controllers?

That is all we wanted for DC. The perfect 6-Button MD/SAT D-Pad and 6 Face-Buttons. So difficult Sega?

Opa-Opa said:
That is all we wanted for DC. The perfect 6-Button MD/SAT D-Pad and 6 Face-Buttons. So difficult Sega?

You are welcome, just trying to do my duty and spread awareness about these. I agree, this is pretty much what Sega fans wanted and expected 20 years ago. Why they never gave it the Saturn 8-way D-pad and 6 digital face buttons too, I will never understand.

Hopefully, when they do their planned modern version, it feels good enough for me to replace my Xbone controller with on PC to use in modern games. They should have L and R bumpers as well too above triggers even though C and Z are digital L and R triggers, just so it works with modern PC games.

If they can't make them compatible with Xbox One consoles because MS still has a patent or block on 3rd party wireless controllers being made for their systems, then hopefully there will be some way to use the wireless ones on them. Looking at the modern Saturn and Mega Drive/Genesis dual stick pads they are pretty much set up like most modern systems. They have a home and Start and Select keys, as well as L1 and R1 and L2 and R2 triggers as shown off here. 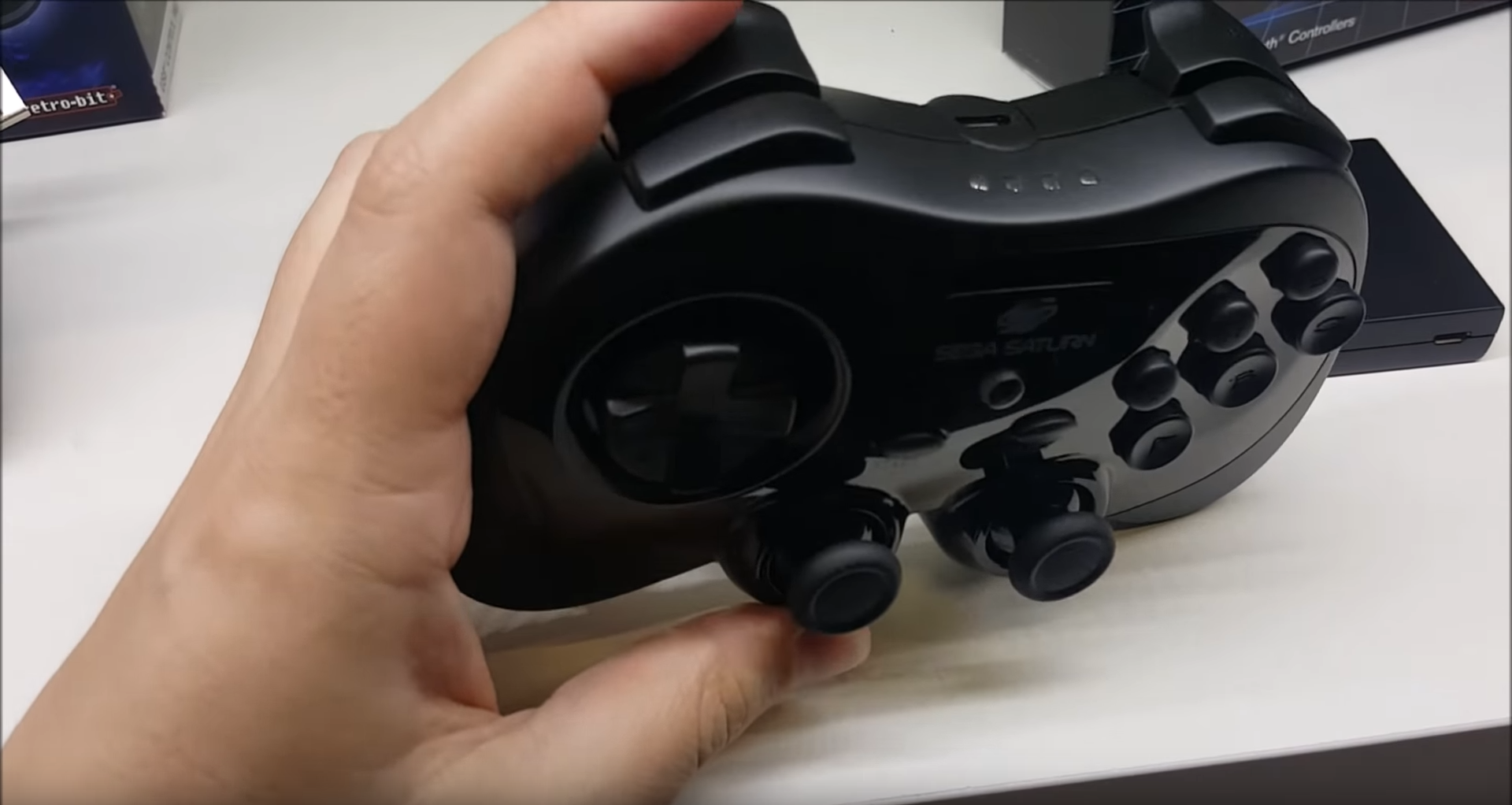 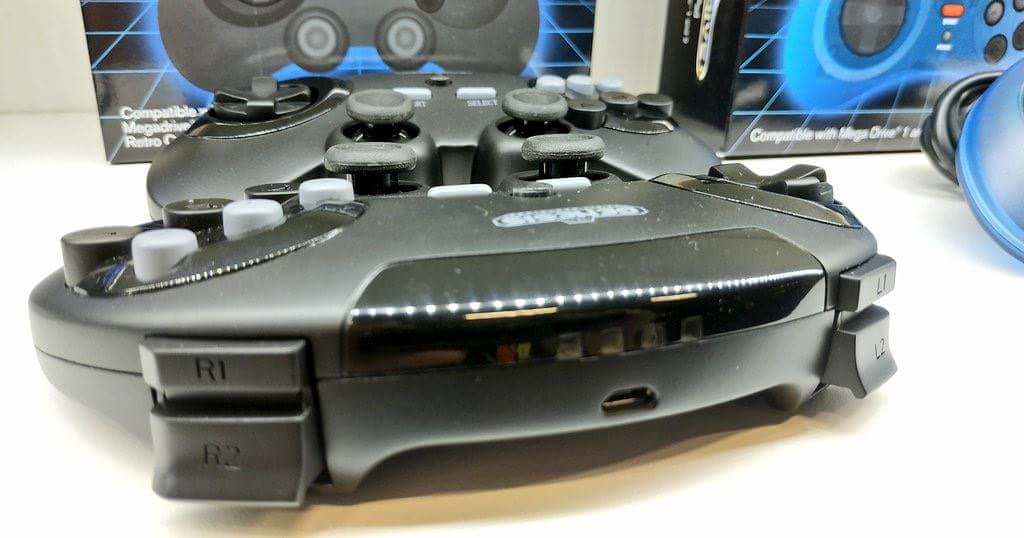 So chances seem pretty good we will get nice modern Dreamcast controllers for other systems such as PS3 and PC since they confirmed the 2 controllers in images above would support those systems. But I really hope some way we can use the DC one on the Xbox One. That would be so cool.
Last edited: Jun 23, 2019
Reactions: Cobra! and Opa-Opa

Hmm, semms like the best of all worlds only complain would be, we try to figure out the perfect controller right, the push-in analog triggers (GameCube style) should be classic Nights/360 alike.

Edit: I'm not shure if they go by angle or push

If they are angle style and the rubber under the buttons and D-Pad is good, great controller!

And I hope when plugged in per USB like XOne, data will be transferred by cable. I hate latency.

I was interested in these when they showed the earlier versions which looked nearly identical to the original Sega-made controllers. Now that they've added all those analog sticks and extra buttons, I'm not so sure. It doesn't even look like it's made for use on Sega Saturn anymore.

The Saturn dpad on DC controller could be good, but the Saturn button layout may not work well for all DC games. Some games use the 4-button diamond layout for movement.

I do like the Saturn original port controllers that came out, but what happened to the white and gray version?

Oh no worries, they said they still also planned on making wireless ones with traditional style and layout as well. Not sure if that is thier plan for the Dreamcast ones, but they definitely said they would for the Genesis/Mega Drive and Saturn ones.

And you are talking about FPS games and like MDK2 how they use it for looking? Yeah I think most those games already allow custom controls, but back at Assembler we were discussing the feasibility of editing the executable of the games to use the other extra inputs like on the modern dual analog versions. Where there is a will there is a way. That is why these are such a huge deal, they open up a lot of possibilities because the Maple protocol supports a lot more inputs than are on the released official controllers. There is even a D button that was never used in the protocol that could possible be used for something.

So say like the home button on the new dual analog wireless controllers maybe make that input a macro of the soft reset where you push A+B+X+Y+Start to reset the system.

You can see what all inputs the Maple protocol supports here, and another analog is one of them.


Code:
And then the digital inputs.

Edit: Here you can see the wireless controllers I was talking about in this video here, as well as footage of the new Dreamcast controller mock up.

Jepp, the "banana" MD 6-Button was the real deal. I think I even like it a tad bit more than jap Saturn pad. Dragon Punch was never as easy as on this thing.
Reactions: Anthony817

That's nice! If they really make it dual analog for the Saturn I will totally support that in my game. I think there is room in the Saturn controller protocol for another 16 bits input (x and y analog at 8 bits each), which is all you need.
Reactions: Anthony817

Well if the Saturn's protocol also could have additional inputs and joystick support it could be cool to look into hacking the executable of games as well for more modern controls. Especially FPS games.

Just a small update, but besides the stuff we already seen at E3, they made a larger original Mega Drive/Genesis style controller now. And some new wireless controllers are shown off. Still no news about the wireless dual analog MD/Genesis and Saturn controllers. These are still being worked on. They said they want them perfect before release. I say take all the time they need. 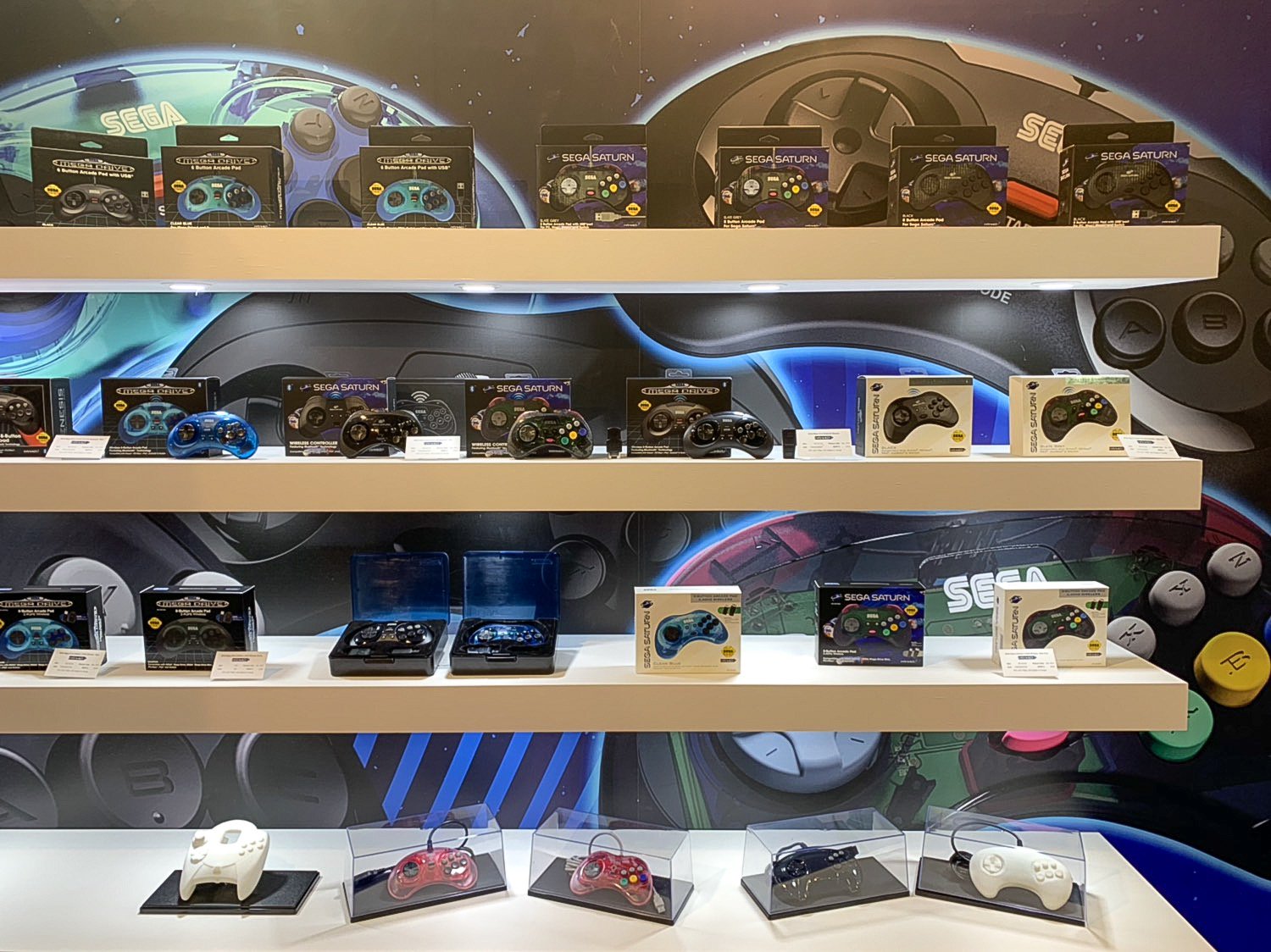 It has been AGES since we got any kind of update! They have a new image of the final design here on a blueprint as well as an ETA when we can expect it to release! The dual analog versions would also come out later. I presume it will follow the same standard they did with the other 2 systems controllers. Wired and wireless normal looking controllers first, then dual analog.

And they also confirmed that official controllers from the big 3 will be compatible on the Saturn at least! I reckon it is the same for the Genesis/Mega Drive and Dreamcast when those dongles are released.

Just give me a PC wireless Saturn pad with dual analog sticks and dual triggers already!
Reactions: Anthony817
You must log in or register to reply here.