Skies of Arcadia no censored version

You are using an out of date browser. It may not display this or other websites correctly.
You should upgrade or use an alternative browser.
F

We are doing an uncensored version of Skies of Arcadia, instead PAL version (from japanese_cake patch VGA release) with JAP skins that have be change like this one :

We are going on well, but I would like to use this project for trying to import some models and skins from gamecube version like Vyse and Alfonso : 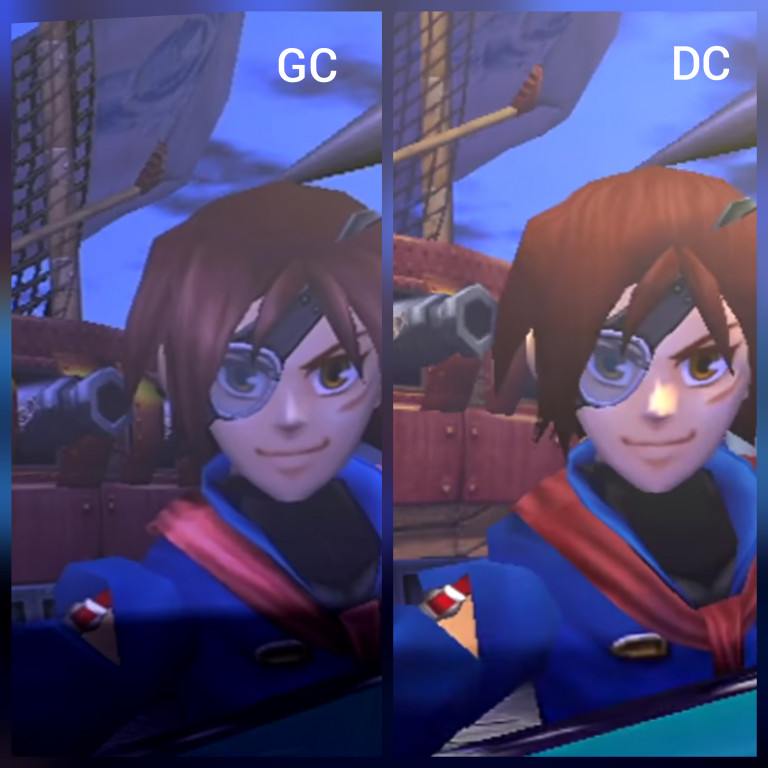 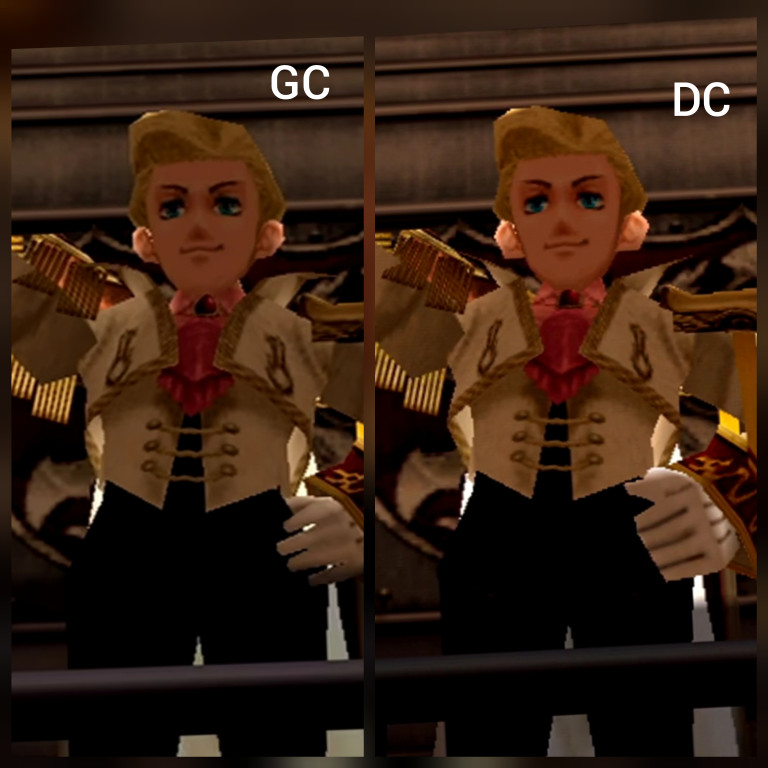 
so I had a look on datas. There are stored identically but as we know the gamecube version is quite compress and for a file with textures like player.MLD (we can find Vyse textures here), I have this :

All files are compresses by the same way.
Do you have any idea how I could I unzip the files ?

May you can suggest me a gamecube forum where I could find some help please ?
Reactions: Americandad

What was censored in Skies of Arcadia?
F

Some models, the picture above, cigarets etc... 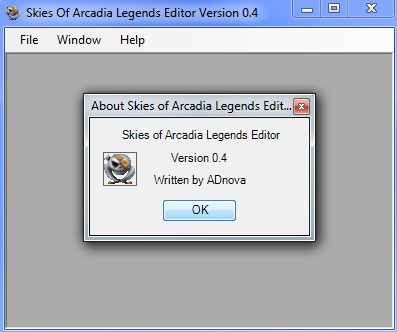 The SOALEditor is a game editor for the Gamecube game Skies of Arcadia Legends. The current versi

and here for DC

Thanks a lot it works well but only for textures (that's already very good).
I'm looking for model too.

But I can work now

fafadou said:
Thanks a lot it works well but only for textures (that's already very good).
I'm looking for model too.

The first disc is almost done, here a list of modifications :
Dyne now has a permanent Cigar, except for one scene.
Willy, Gilder's parrot also has a cigar permanently.
Gilder has a victory pose where he smokes a cigar.
A pnj has been added on Sailors' Island, it is a drunken sailor. His dialogues are translated.
Bellena has a sexier/lighter outfit in Maramba, identical to the artworks.
Vigoro has a lighter outfit in the scene where he is a little bit forcing on Aika, he also keeps this outfit in combat when we are facing him.

Of course, the game is VGA compatible thanks to Japanese Cake and since this is the pal version it is translated in English, Fr and probably other languages.

The changes on the CD2 should be identical. Some blood will just be added in a scene with Ramirez.


I'm still looking for textures improvements and models, no time to look much but I go on.
Reactions: Americandad
F

There is one difficult file to uncensored...
It's the ramirez's blood at 1min11s :

It's not present in PAL version :

The file is the ME131I.SCT
Two issues : taking 4 langages and inject instead of jap and add others langages.
Import the blood animations in PAL version.

The first word of 4 bytes is not to be modified, it is the same for both versions, for me it is the name of the file :

The second word of 4 bytes, I don't know what it is, I was thinking of a pointer but the file is smaller...
Both are to be tested...

The third word, I don't know what it is either... I was thinking about the total of the instructions of the "loop" but it doesn't match ...

After that we have the list of instructions and image files or pick. and just before the pointer.
In all this list there are 7 differences in the first place the languages : 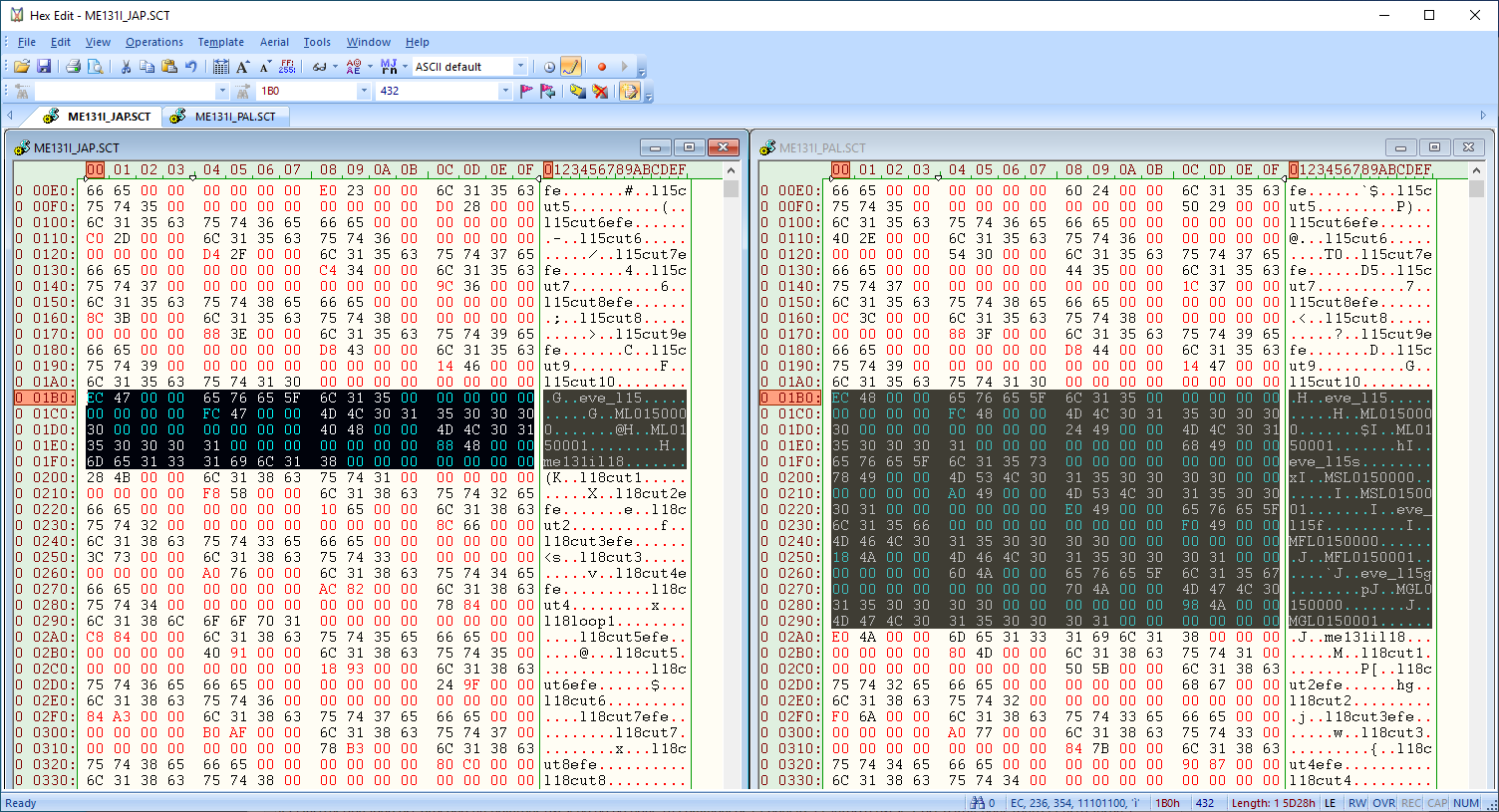 3 more langages more than jap version in PAL :
In the JAP file there is only one command "eve_115", in the PAL file there is in 4 first of all "eve_115" which must correspond to english then we have "eve_115s" for spanish then "eve_115f" for french and finally eve_115g for german.
Two dialogs and 6 "eve" instructions in PAL so I'm pretty is sure dialog.

The seventh difference is going to be an extra command on the JAP file at address 0x840 the LIG_123b_def and I think the blood is called there... 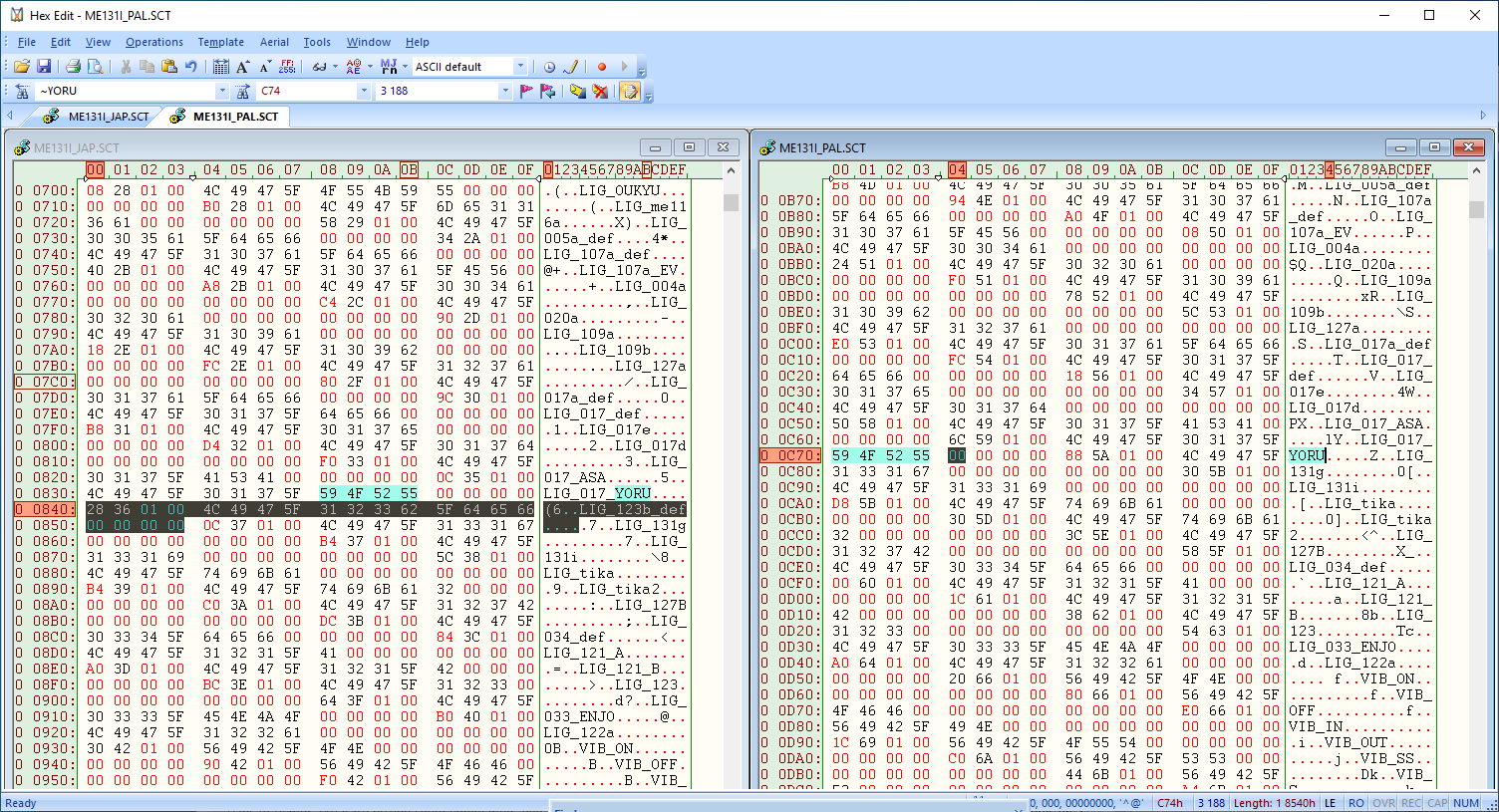 But In fisrt in your opinion what are the datas at the beginning of the file ?
Do you have any idea please ?
N

-d for decompress
-o for output

Also, here are some findings about the .SCT structure from AdituV:

Oh thank you very much :-D
due to covid, I must have a break but thanks to you, I have more informations to go on.
Reactions: Noseguy
F

Noseguy said:
Also, here are some findings about the .SCT structure from AdituV:

Second thing at offset 0x5 and 0x6 PAL and JAP have different byte, do you know what those bytes are ?

Thanks for gamecube decompress tool ! It works like a charm Hope I'll be able to learn more with it.
Last edited: Nov 5, 2020
F

We are testing ME131I.SCT file with Ramirez's blood, but I think I have finally finish to patch it.
I explain here how I've done soon.

Thanks to r3nz0, to help me

The goal was to import in PAL version with 4 langages, Ramirez's Blood.
It was easier to choose this way, than import 4 langages in jap version due to text encoding issue.
Thanks to all people who help me

How a skies of arcadia file is managed :
1) The first word of 4 bytes is not to be modified, it is the same for both versions, for me it is the name of the file :

The second word of 4 bytes, I don't know what it is, I was thinking of a pointer or the file size check but the file is smaller...
fortunately no need to change this one

The third word is the number of instructions, I add one instruction (lig123bdef), it's not the Ramirez's blood but it was in more in the jap version so I added it.
I patch this one from 0xC0 to 0xC1 :

after that you have the instruction list starting at adress 0xC :
each instruction is managed on 0x14 bytes :
For example with the fourth called "l15cut1" :

ibb.co
4 firsts bytes are the pointer, the beginning adress of instruction :

ibb.co
the rest is for the name :

After the listing you have the code, at the end you can find a new listing of files that are called.

2) In first I compare the size of each instruction doing the difference length with the next pointer and the actual of the instruction :
example for init the first one :
0xC4 - 0x00 = 0xC4


I did it with US and JAP, because there are only one langage both.
i found that instructions : l18cut10, l18cut11, l18cut13 are bigger in jap version, and do the same size in US and PAL versions.
I imported the JAP datas in more in PAL version, simply by doing a copy and an insert.
I used the free software "beyond compare" :

After that I have to patch the pointers of listing due to new datas.
add the datas adds to next pointers of l18cut10, l18cut11, l18cut13 and lig_13b_def until the end of listing.

The "small" pointers are not to patch because the code is not modified next of them.
There are still in black in beyond compare, but I checked them too in order to do not mistakes.

Last thing to understand a pointer inside the code work by adding to his own adress to its number
for example with the one of the last screen capture :
0x00 01 31 B8 at adress 0x45AC

this one one target an other instruction :


Last thing to care of is the text there are 4 pointers for each text than Jap have only one.
After a lot of patience the patch is done :-D

MediaFire is a simple to use free service that lets you put all your photos, documents, music, and video in a single place so you can access them anywhere and share them everywhere.
www.mediafire.com

So to finish the uncensored version, there is a last little issue with Gilder attack.
But we can consider is now good.
With this knowedge, I don't know if it's possible to import the Gamecube addings, but it can help for sure.
Reactions: Gromber
You must log in or register to reply here.