The end of the game.com

Mr. Sound-About said:
What's your source on this? I've never seen any official announcements or even "hints" from Tiger about either of these.
Click to expand...

(This article comes from an old issue of EGM, BTW.)

Ah, I have seen the Virtua Fighter 3 mockup before, that's right. But it was a long time ago and I'd forgotten about it. Thanks for bringing it to my attention, I'll add it to the list with the next website update.

As for Sonic X-Treme, that link contains no evidence / sources for an alleged game.com version, so that's a no-go for the website. I try to base all the info there on facts, not speculation.
Last edited: Jan 20, 2020

Tyree_Cooper said:
Well they did make a Tiger handheld version of the game, so it might as well be real.
Click to expand...

They made a standalone handheld for Mutoids too, but the announced game.com version never came out. Same scenario.

Tiger got broad licenses to make a variety of products. Many of them were cancelled. The standalone handhelds were a huge market for them back then, so of course they'd release as many of them as they could, to capitalize on the fad. They're looked at nearly universally as a joke now, but when I was a kid, virtually everyone had at least one of those things: myself included. It was a plague.

Anyway. I'm spending a lot of time investigating all this, talking with the people involved, et Cetera. My aim is to get to the bottom of as many game.com "mysteries" as possible. So if and when I have verifiable intel on Castlevania and other games, I'll share as much as I can. Patience, man.

Mr. Sound-About said:
As for Sonic X-Treme, that link contains no evidence / sources for an alleged game.com version, so that's a no-go for the website. I try to base all the info there on facts, not speculation.
Click to expand...

I've not yet been able to find a source for Sonic X-treme, but I did end up remembering the existence of this instead:

According to Sonic Retro, the above screenshot comes from a promotional booklet* packaged with the game.com itself, so I'd consider that quite definitive. Can we at least add Sonic 3D to the list of cancelled titles?

(This is purely speculative on my part, but maybe Sonic 3D for the game.com was a similar interim replacement for Sonic X-treme, as Traveller's Tales only ported Sonic 3D to the Saturn after X-treme's cancellation? With that already being several months old by the time Tiger was ready to launch the game.com, perhaps they decided it was better to have something approximating the more recent Sonic Jam compilation instead of Sonic 3D? At the very least, I've managed to discover a few shots of various branded electronic items relating to Sonic X-treme, including a portable radio and cassette player. However, I'm fairly sure that I once saw a Tiger-produced handheld of some kind bearing this name, though it might just have been another of the company's many standalone devices, since the first three Sonic games, Sonic Spinball and Sonic 3D all received this treatment. Could it be that I'm confusing Tiger's handhelds altogether, and that Sonic X-treme was actually intended for the R-Zone from slightly earlier?)

*On your site, this screenshot can be found in a 1997 catalogue along with the logo for Sonic Jam, even if all the surrounding artwork is from Sonic 3D. I'm now quite convinced that Sonic 3D was dropped in favour of "Sonic Jam" at the last minute, though I'm still looking to see if Sonic X-treme was ever mentioned as well...
Last edited: Jan 20, 2020
Reactions: speedyink

Allie said:
*On your site, this screenshot can be found in a 1997 catalogue along with the logo for Sonic Jam, even if all the surrounding artwork is from Sonic 3D. I'm now quite convinced that Sonic 3D was dropped in favour of "Sonic Jam" at the last minute, though I'm still looking to see if Sonic X-treme was ever mentioned as well...
Click to expand...

Yes, I have this catalogue. You're correct that it was included with the system.

By the way, here's a picture of my game.com and its box. 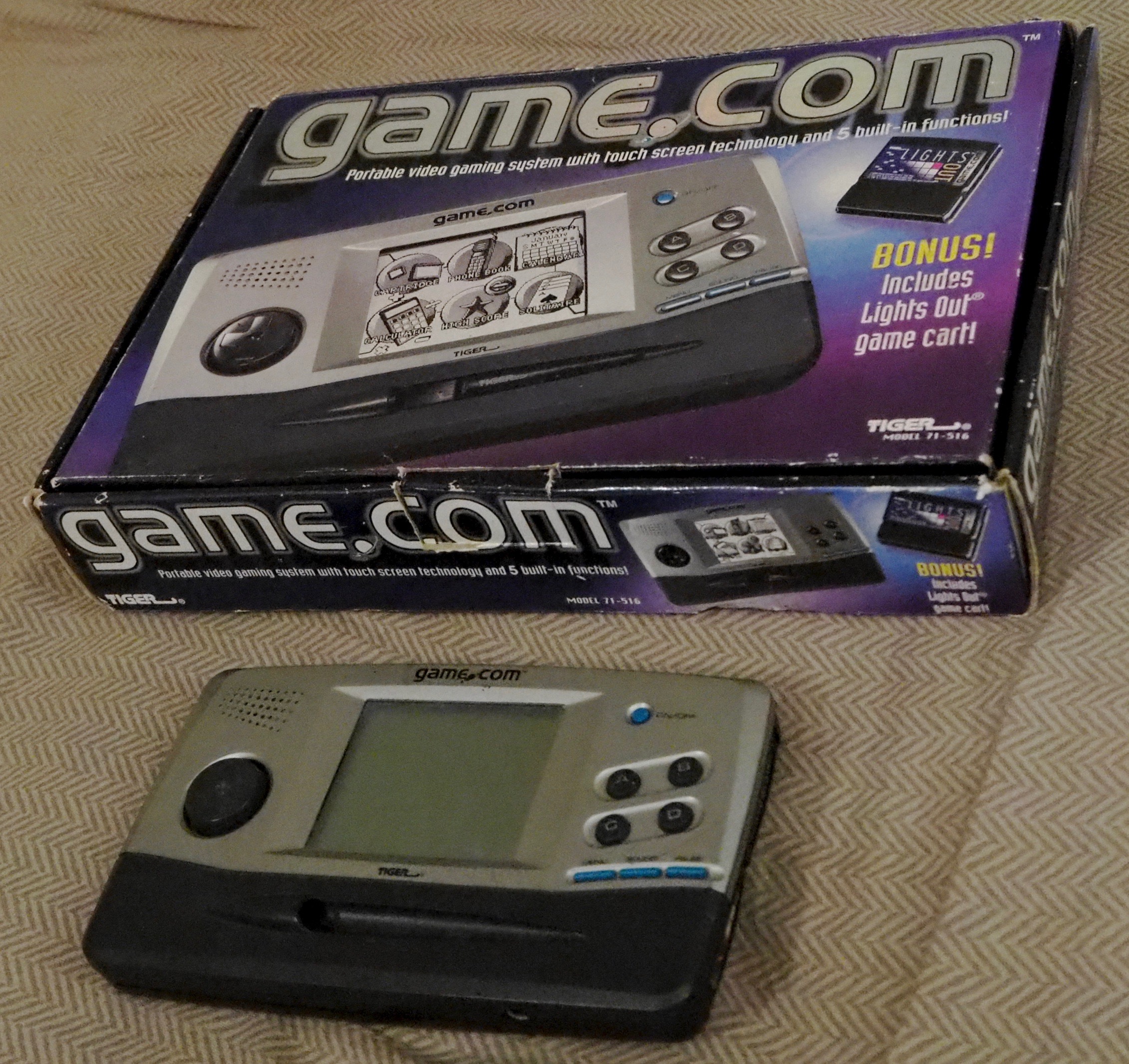 Neither are in very good shape, but I think it's kind of cool that I've managed to keep them all this time. In addition to the system and box, I also have the booklets and 2 games: Lights Out and Indy 500. I lost the stylus at some point. It's possible that it's still sitting in a box somewhere, but who knows if I'll ever find it.

The 1999 Tiger Electronics toy fair catalog recently landed on my doorstep with a big ol' thud, which would have been fine – if I didn't have to scan it. Sadly, duty calls. So I brought it inside, snipped its binding rings, carefully removed all of its game.com related pages, aaaaand... D'OH!! The pages were too wide to fit any of my scanners! Grrrr! Thanks, Tiger: you have screwed me again.

But, whatever. After a bit of disgruntled scanner shopping, I found myself in possession of a brand new Plustek OpticSlim 1180 jumbo flatbed scanner (very expen$ive): perfect for the task of properly archiving the aforementioned catalog pages.

And... HEY!! There's some interesting stuff here, y'all: namely info & pics for a slew of unreleased games. So have a look!

The end of the game.com
Reactions: Yakumo and wheelaa

High time I added some new interviews, isn't it? After all, I had two former Tiger employees on the horn back in June of 2020 [!]. Why not finally share our convos with the world?

These gentlemen were kind enough to share their unique, firsthand insight into the ups and downs of the game.com, and of Tiger in general. The resulting interviews – which I've just finished properly transcribing and editing – are the most in-depth and extensive yet, to appear on this website!

Tyree_Cooper said:
Well they did make a Tiger handheld version of the game, so it might as well be real. That's why I'm not sure it's fake, but there's no proof other than those screenshots.
Click to expand...

I should probably be packing a suitcase for my imminent trip to Japan – especially since I've been unable to visit for the past three years [!] – but what the hell: Let's make the game.com a priority.

I'd be a Halloweenie if I missed the “opportunity” to announce the discovery of the Castlevania: Symphony of the Night prototype (or as I like to call it, “Simfauxny of the Naught”) in time for the upcoming holiday. So... BOO! I'm announcing it.

Go to the unreleased games page, where you'll find a link to Castlevania: Symphony of the Night. Click that link, et voilà: Drac is back. I've also added the game's icon to the cartridge icons page.

BTW: In case you're curious about the origins of this prototype, I invite you to read some of this website's recent updates: a few of which snuck in just now! wink 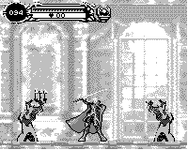 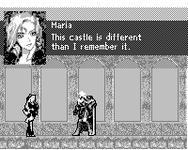 An article popped up about the Castlevania prototype...

That was pretty decent of them, I must say.

Mr. Sound-About said:
An article popped up about the Castlevania prototype...

That was pretty decent of them, I must say.
Click to expand...

Please note I am not requesting anything.
Are you intending to release a dump of the game publicly?

deadlegion said:
Please note I am not requesting anything.
Click to expand...

Sure, you are: You're requesting an answer to your question.


deadlegion said:
Are you intending to release a dump of the game publicly?
Click to expand...

I'm not, but they are. Have... fun?
Reactions: deadlegion

Maria: "This castle is different than I remember it on PlayStation."

Surprise honey, you're in a Game.com!

Let's have another interview, eh? Today it's Brian Rubash, who was the Director of Web Marketing at Tiger Electronics from 1997 - 2002. A very enthusiastic fellow indeed, Brian was kind enough to spend several hours on the phone with me back in 2020, rapping about the game.com and his favorite company. It is, so far, the longest and most detailed interview posted to the website, so be sure to give it a good read!

I put myself through the horror of recording the Castlevania: Symphony of the Night soundtrack – via real hardware of course – so if it tickles your fancy you may now listen to it online, or download it. I personally recommend neither option.

Game.com is kinda nostalgic, even though it's not fun.

A very impressive, indepth vid about the Castlevania prototype was upped to PooTube today...

It's pretty cool, Beavis.
You must log in or register to reply here.