granted the Sega Saturn failed, especially in North America, but it’s still hands down one of my favorite retro consoles of all time. It’s a hot mess of chips and hard to program for architecture but it still has some of my fav games of all time on it.

Who else here collects for Saturn still, even with the insane prices recently?
Reactions: Getta Robo, Cobra! and HI_RICKY
D

I've never had an enormous collection, but I greatly built up my saturn US CIB collection to around 20 games about two years ago. Prices were very high then and I just bit the bullet and paid a lot. Admittedly, I was buying some of the stuff just for the box art and to bulk up the collection (e.g., Offworld Interceptor, Daytona USA) and make it look more on par with my larger DC and genesis collections. After having my fun I whittled things down to about 8 games that I've kept because I genuinely love them and got rid of the rest, which was mostly stuff I bought to look nice on the shelf, or games I thought I'd like but ultimately didn't enjoy that much (Burning Rangers, Panzer Dragoon 1). Did a similar downsizing with my genesis collection. Kept a picture to remember it by. 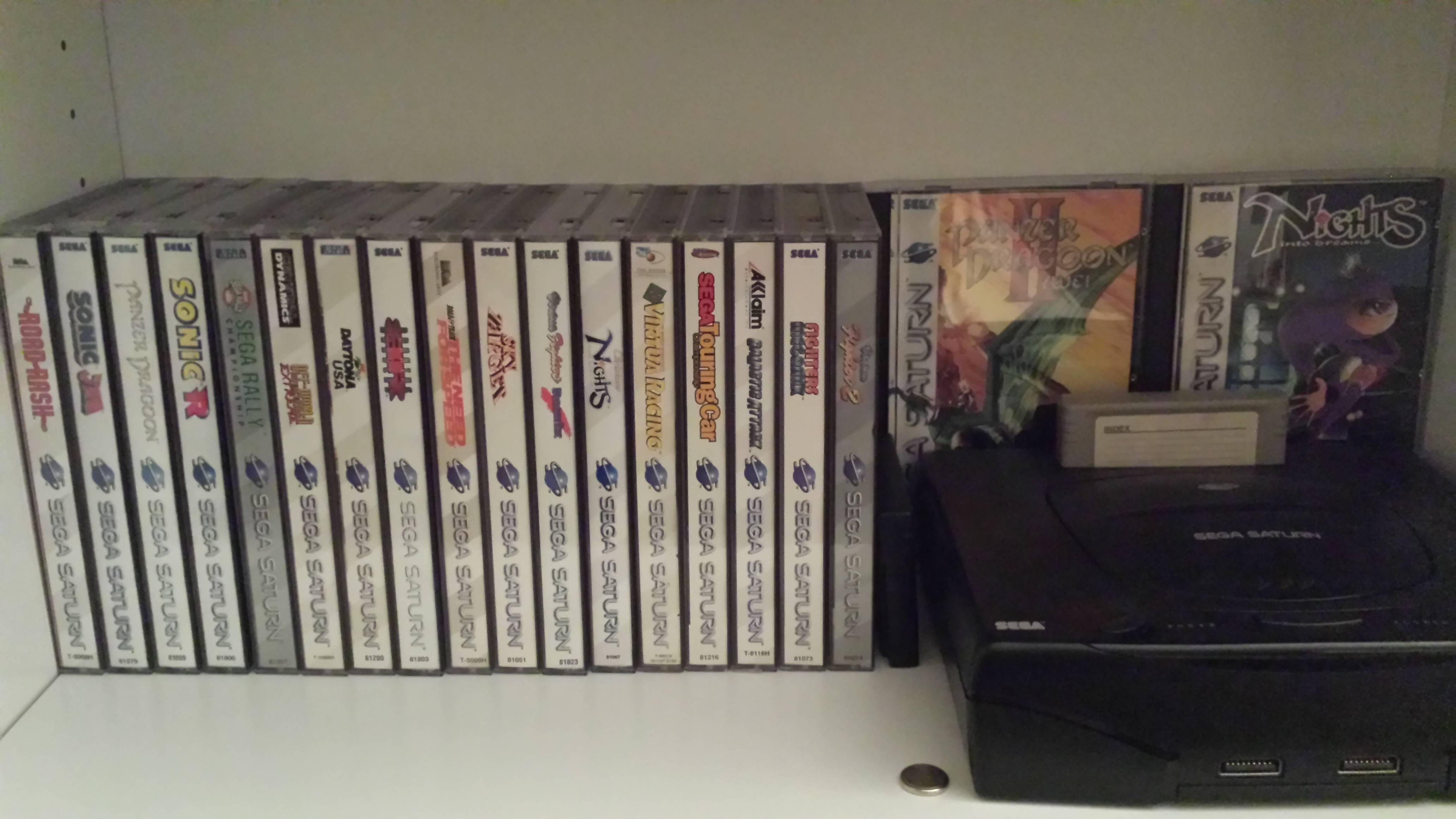 I like the Saturn a lot. I have one US model and one gray Japanese model, and a couple non-working systems. I mainly collect Japanese games; my Japanese collection is a lot bigger than my US collection. I started collecting for it when a lot of the Japanese games were still pretty cheap. I didn't own a Saturn when it was still being produced, and my experience with it was very limited until years later. I was mainly playing PS1, N64, PC and arcade games during that generation. I became interested in the Saturn much later, but I really like it now. Some of my favorite games for it are the Sega AGES games (especially Out Run), shooters like Radiant Silvergun and Layer Section, and ports of 2D arcade games in general. Oh yeah, and I own a Sega ST-V too, with one game (Die Hard Arcade). I've kind of slowed down collecting for the Saturn because I already have most of the games I want, and like you said, the prices can be kind of ridiculous now. I still play my Saturn pretty regularly, though.

One thing I find interesting about the Saturn that I haven't really gotten into yet is the RAM cart. At some point I'd like to get the 4MB cartridge and X-Men vs. Street Fighter, and maybe Vampire Savior and others.
Last edited: Jul 23, 2020

I'm due for more Saturn games but with international shipping in limbo at the moment it could be a while.

Some US sellers have a few games I need for the collection though.

PopetherevXXVIII said:
I'm due for more Saturn games but with international shipping in limbo at the moment it could be a while.

Some US sellers have a few games I need for the collection though.
Click to expand...

yes shipping has been a giant pain in the ass lately

Still the most visually impressive game on Saturn!


the best Bomberman game ever. Full stop
Click to expand...

Love this game even after all these years

The Sega Saturn has a lot of awesome imports and it's a shame they did not the attention they deserve.

Not to say that the US releases has a fair share of amazing games. Unfortunately, the ridiculously high prices often make me choose the cheaper alternative. Which is great because I am studying Japanese too.

I have a US Model 1 with an Action Replay card.

Trevgauntlet_Neu said:
The Sega Saturn has a lot of awesome imports and it's a shame they did not the attention they deserve.

Not to say that the US releases has a fair share of amazing games. Unfortunately, the ridiculously high prices often make me choose the cheaper alternative. Which is great because I am studying Japanese too.

I have a US Model 1 with an Action Replay card.
Click to expand...

yes Japanese collecting is the way to go! Sooo much cheaper

If Sega wasn’t going to give us a Sonic game on the Saturn, Nights was the next best thing

so, was sotn a mess of a code to port, or is the ps just an overall better console? sorry but the extra areas and enemies are a joke. a faithful port would have been good enough (seems they added stuff because they realised the port was bad).
p.s. yes i've never liked the saturn, nothing personal, i just never cared much

Apparently, the engine for the Playstation version was coded for a 2D game to run optimally on a 3D platform. This engine wasn't ported well to the Saturn. I never found definitive proof that this was the case, however.

If you are a fan of the Playstation version, it can be fun to see the extras on the Saturn. However, I wouldn't play the Saturn version as my introduction to this game; a game which some (including myself) think improved on the Super Metroid formula. Recently, I learned of a hack that improves the Saturn version, but I haven't tried it yet.

The best Die Hard game ever

The fact this looked so good, ran well AND used the Saturn’ higher resolution mode...so good!