Mathieulh said:
It's not, it is for swapping discs and it works just as intended on the 1.15b variant.
Click to expand...

I'm talking about the clone with the 0.6 "update" (the only release I know).
M

truemaster said:
yes he aknowlegde the issue, but no word about removing the updater. or when a newer one will be uploaded. good for you or anyaone else that want the update @Mathieulh have it
edit updater is up again and no its the same one as before
Click to expand...

Trust Deunan to silently push an update without telling anyone. How is that proper practice anywhere? xD
Reactions: truemaster

Thanks I got the file Mathieu. I'll give it a shot as I was on the latest firmware 5.15 before this. Here's what Deunan just posted....

UPDATE2: There’s a bug in early GDEMU bootloaders that was fixed in late 2016, it can randomly lock up the device while trying to execute the updater. Sorry about the download link confusion, I have a revised version ready but I need to test it some more. I will upload that one in 2-3 days.
Reactions: truemaster
T

updater for bootloader has been updated. this one is indeed diferent than the original one. those have beed updated corect with the 1st one they dont need to flash the new updater. but if you dont have updated yet use the newer updater
Reactions: Greg2600 and fafadou

Thanks. The old one did work for me though.

your problem is the updater. download the latest one from gdemu site. no you dont need the 5.20.0 first. also make sure your psu make proper contact with motherboard and is providing stable 3.3v. gdemu will cut operation if 3.3v drops. if the problem persists contact deunan

Thank you, I understand !!
I have another question, my Gdemu was produced in 2014, I have to use a program before to prepare the Gdemu and then I can update with version 5.20.1. That’s what it is ?
I prefer asking because it’s a new update so I want to be sure.
T

basicly there 2 steps and 2 updates to do. 1st the bootloader updater. and then the 5.20.1. both updates are on gdemu site.
Reactions: fafadou

I've made an windows app to manage content on SD Card for GdEmu/GdMenu.
Some friends have been using it for some time now. Yesterday I promoted it to version 1.0 and released to the public.
If anyone wants to give it a try: 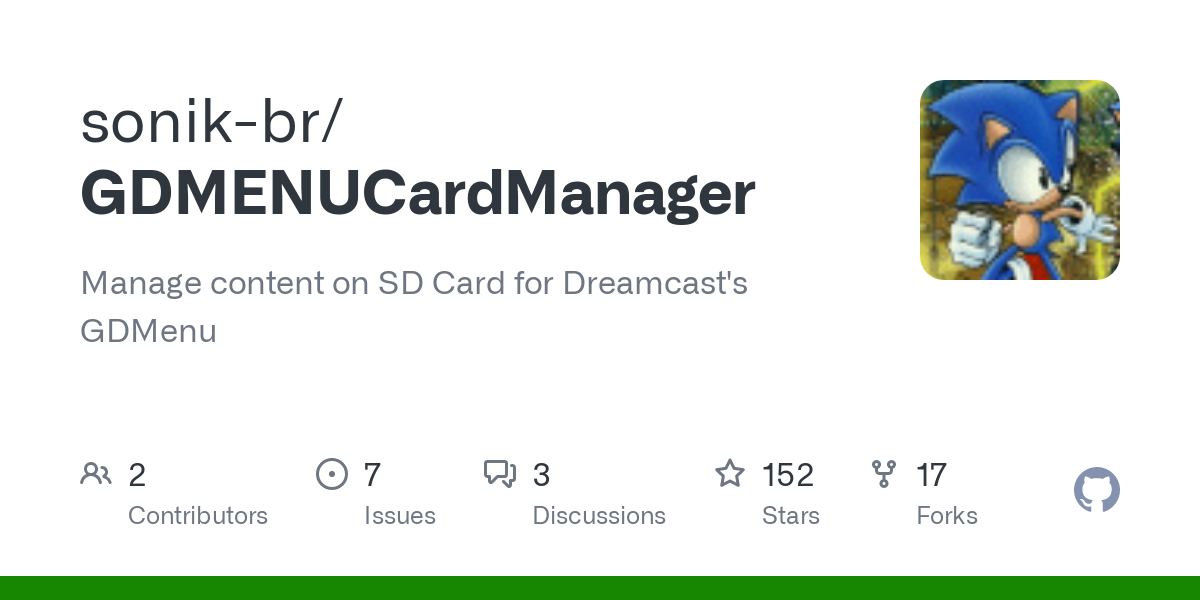 Manage content on SD Card for Dreamcast's GDMenu. Contribute to sonik-br/GDMENUCardManager development by creating an account on GitHub.

ok i will add it to fisrt post as alternative to gdmenu. is indeed good. also in oder to conserve space i may not replay always to new things like that and just update the first post.
Reactions: sonik
S

@truemaster just a small correction. On the first page it shows as "a new nenu". It's not. ;-)
It's just a windows tool to manage content on SD card.
GDMenu v0.6.0 is bundled on my app and it's copied over the SD card.
Reactions: truemaster
Z

Anthony817 said:
Don't even attempt it unless you want to brick your device and have a paperweight. No logical reason to even update since the only thing that is lacking is Bleem retail support. japanese_cake is already removing all protections from the retail bleems and we will be able to play them soon on the GDEMU clones.

The Chinese clone manufacturer had to customize the previous firmware to run on the clones due to slight differences in the hardware such as completly different Amtel chip model numbers as stated above, so many things were changed vs how they are in the retail version. This is why you can't simply flash them with the retail firmware because doing so will brick the device.
Click to expand...

I have had a couple of those ‘5.15b’ clone GDEMUs through my hands, and despite being pictured on the auction site with the correct Atmel chip, they actually had the wrong one fitted still, same as 5.5 and 5.15 versions of the clone. Luck of the draw? I’m doubtful. The interface connector was also hacked down to fit, with one of the units being a bit ‘sensitive’ to being positioned correctly. You pays your money, takes your choice. Both worked as expected otherwise. If I had to buy another, I’d go with a 5.15 as long as it had the correct crystals fitted, since I don’t care much for the metal SD connector (and the correct Atmel chip is the selling point for the 5.15b, and that didn’t turn out to be the case).

FWIW I do own a couple of Deunan originals, the others went in systems I modded to sell (with full disclosure as to the provenance of the GDEMU fitted).
You must log in or register to reply here.