I come straight from the Jaguar VR headset thread...which, even on its original E3 presentation,
only was a "VIRTUALITY" headset by "Arcadian Virtual Reality LLC ", which was later aquired by virtuositytech.

Id love to try "Zone Hunter", which can be played at the "Computermuseum Berlin" on the original 2000SU hardware.

The new right holders already wrote that they ported all games to Windows, OSX, Xbox and PS systems.
But I cant find anything.

Some german guys preserved a system. Documented the cables, BIOS and HDD.
The HDD (500mb, FAT16) includes a ETS (Engineering Test System) for example, that allows testing of everything attached to the unit.

They could dump the HDD and boot it in DOSBOX...but most hardware wasnt recognized. The contact to the M.A.M.E. community was more or less theoretical, as the ROM chips needed to be dumped, but were protected...and "one of a kind" Programmable Logic Devices.

I read somewhere (though I don't remember the specifics) that Sega had some kind of deal with Virtuality at one point. Their Japanese division, Virtuality KK, made a few PC games using the PowerVR series 1 chips. I wonder if their work on these games ended up influencing the development of Dreamcast games, since that system also uses a PowerVR GPU. Something that made me think about this is the fact that one of Virtuality's PC games, Moon Racer, seems to bear a very strong resemblance to Buggy Heat for the Dreamcast. That game was developed by CRI. At one point both CRI and Sega were owned by CSK. I wonder if some of the people who worked on the Virtuality PC games ended up working for CRI or Sega on Dreamcast games.
Reactions: ItsMeMario
D

I think Sega's link with virtuality resulted in Net Merc, one of the rarer arcade Model 1 games - which I think used a virtual reality headset. 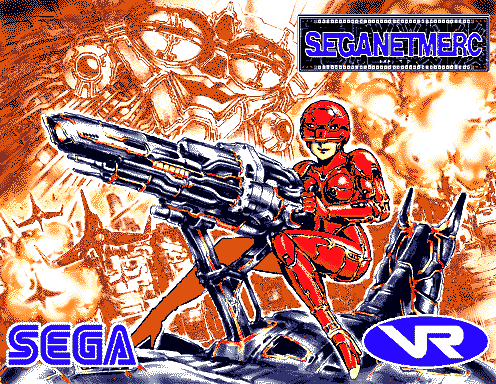 Dennou Senki Net Merc[2] (電脳戦記ネットマーク) is an arcade game developed by Sega with assistance from UK-based Virtuality. It is the only game created for the Sega Net Merc (セガ ネットマーク) system (a Sega Model 1 arcade board adapted for virtual reality), so the two are often used interchangably.
Click to expand...

Development
Since its conception in 1985, Virtuality had been exploring the commercial use of virtual reality for several years when the Net Merc project began, and had already seen a great deal of success with its 1000CS and 1000SD systems in the early 1990s. Though the games were often primitive, Virtuality machines were an enticing prospect for arcade venues on the decline, and were well received by the general public, who until this point had largely been unaware of the concept. Virtuality was one of the driving forces behind the early 90s VR craze, likely even inspiring Sega of America's own VR attempt with the Sega VR in 1993.

However, while accepted by the public at the time, the 1000 series was restricted by the technology, being powered by Amiga 3000 computers and running, on average, at about 20FPS with a low screen resolution. While the 1000 series was able to convey a virtual world, the world was small, consisting of flat shaded polygons and simple geometry. The 2000 series was able to address some of these concerns by switching to Intel 486 IBM PC compatibles in 1994 (followed by the lesser-known Pentium-based 3000 series).

As evidenced by the likes of Virtua Racing and Virtua Fighter, the signficiantly more expensive Model 1 board could produce higher resolution graphics and more polygons than most PCs at the time, all while maintaining a 60FPS frame rate. The Net Merc project was a combination of Virtuality's previous VR technologies and Sega's once-cutting edge arcade board.

The project was developed in the offices of Sega AM3, with two programmers (Andy Reece and Stephen Northcott, a former programmer at Incentive Software) and two artists from Virtuality in the UK. Roughly 70 units made it into production, the vast majority of which never left Japan.
Click to expand...

I also think Dactyl Nightmare ran on an earlier version of the hardware that was based on Amiga computers. There's a guy in the UK who (a few years ago) had numerous virtuality machines and parts. It was kind of a personal mission of his to preserve what he could of the stuff and bring a unit to various game related events. I think he was profiled on the BBC. He said at the time it was getting harder and harder to find parts and keep the stuff in working condition when it periodically breaks down.
Reactions: ItsMeMario

Weird, I remember playing on a Virtuality VR station back in the 90's, but the one I played had a big "Philips" sign on it. Add Atari to the list, and they sure partnered with many heavy hitters back in the day.