Thanks Neo for your tests and I feel the delay but I am full of work.

For the tests that I did recently, this type of 0winceos must have some gdrom protection, and it is possible that this protection is in the file WSEGACD.DLL.
The data in this row is also housed within 0winceos.

In the CDI tests I have not managed to reproduce the tracks, the game behaves as if they did not exist

I have done new tests, this time creating gdi with different LBAs for the audio tracks and as @neo comment, the tracks work correctly.
So I think it's not an LBA problem, but some kind of cdda crash for cdrom.

@neo, could you create some kind of ip.bin that makes the hardware believe that a gdrom is running and not a cdrom?
As I have explained in previous posts bincon is not necessary, this hack removes 0x800 at the beginning of the 0winceos and adds them at the end.

And you make 0winceos truncate it works anyway just removing the 0x800 from the beginning.

However, in the gdrom that 0x800, although if it is in the original, in GDROM it does not load it in ram, which if it happens in CDI

Perhaps with a clean boot that simulates the same functions that a gdrom does, it will be possible to make the tracks play
N

It gets the media type from the syscalls and the hardware. I'm sure it could be patched but idk if that would be enough
Reactions: Pitito
B

I'm terribly sorry to ask this at the eighth page of this topic.
Are you trying to find an issue to run wince games with CDDA for gdemu ? It means the cdda with gdemu and Demul don't run perfectly ?

@fafadou Most wince games do not work well for cdda on cdi.
This fix solves the problem of many of them.

Other wince however need something more

I have been doing new tests, this time with the ARMADA game, in this game the FIX does not work and the music keeps restarting when pausing the game.
I have changed the binary 0WINCEOS.BIN for that of another game in which the music does not give problems Worms World Party and the problem with the cdda persists.
In other words, if with the original ip.bin and with another winceos binary taken from another game, it still crashes, or it is a problem with the change to CDI of the game or it is a .dll or .exe from the WINCE folder that does not do its job well.

I have also discovered a way to run 0WINCEOS through a KATANA binary, thanks to the SEGA SMACK PACK game.
This game contains a KATANA executable, for WINCE games, called SAMPLE.BIN
We must apply binhack to SAMPLE.BIN together with the IP.BIN of the WINCE game, we must also apply DAHACK and CDDA hack and finally hack the values 0xCDE4436A to 0x09000900.
You don't have to do anything to the 0WINCEOS binary
You place SAMPLE.BIN and MAIGO.BIN (this binary does not have LBA protection, so it is not necessary to hack) in the root of the game and create the iso.
Don't forget before hacking, change the name of the executable inside the IP.BIN (0WINCEOS to SAMPLE.BIN)
Notes:
I don't know what the function of MAIGO.BIN is, but it is loaded into RAM at offset 0x2C008300.
I have also tried booting a game without using MAIGO.BIN and deleting the entry of this file in SAMPLE.BIN, and the game runs without problems.

With this method it is not necessary 3 fictitious tracks for the audio to be heard on your site, since thanks to the CDDA hack in SAMPLE.BIN the Audio starts on track 01.

Games with cdda problems are not fixed, even though 0winceos is intact,
so the problem may be in a dll or exe file as I have commented before.
Maybe it does not contain enough routines for CD-ROM, and if you have them for GD-ROM
Reactions: fafadou, truemaster and FamilyGuy

I have done another new test, this time I have taken all the contents of the WINCE folder, and the binary 0WINCEOS.BIN of the Worms World Party game (this game does not present CDDA problems) and I have replaced it in the ARMADA game, renaming the executable ARMADA.EXE to GAME.EXE. (Name of the executable in Worms)

The game loads perfectly, but the cdda keeps restarting when paused.

In view of what we have seen, the problem may be due to the change from GDI to CDI format, or the safest thing that is in the executable of the game, in this case ARMADA.EXE.
This executable may need to be fixed, as is the case with many PC games.
For example the iso of the sega rally 2 version pc does not work the cdda either, and I have found this hack to make it work.

Maybe this can be of help to hack these problematic games on Dreamcast.

Curiously, this hack is also used for other versions of PC, such as Virtua COP 2. Does it sound like something to you?
Reactions: truemaster and fafadou

It's been some time since the last time I posted in this thread, but I bring news regarding the CDDA of the Armada.

As you know, this game restarts the CDDA when pausing or entering any game station.
I have located where what appears to be the Audio Summary is written to ram.
Position in Ram from the GDI (in CDI it can vary a bit)
0x8CD1629C

In this position, when you pause, the summary of cdda is saved, and when you remove the pause, it is not deleted.
The summary is saved in the CDI, but when the pause is removed it returns to 00 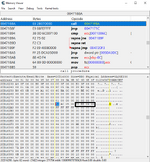 Also in value 01 in position 0x8CD162B4 (A few lines below) is the one that controls the "PAUSE" of the CDDA.
If this value is changed to 00 the audio will not stop when pausing the game.

The file offset where these values are written within the Armada.exe executable
Offset
0xDF49C
0xDF4B4

EDIT:
I have managed to locate the access and write pointer in the resume position and I have been testing to see which one resets the value.
It seems that this Pointer
00 0F 22 9C
Ram
8CE9D568
Armada.exe
0x1A968
The function comes from something higher
Ram
8CE9D406
Armada.exe
0x1A806

It may be the beginning to repair the CDDA of this game in CDI
Last edited: Thursday at 12:10 PM
Reactions: FamilyGuy and truemaster

Ok, a little news
I've been trying to find a solution for the last 4 days, but I'm not an expert in this...
Perhaps @megavolt85 , @SiZiOUS , they would be the most indicated since they better control this topic

About how to repair the summary, I have no idea at the moment how to do it...
If I have been able to locate a small fix so that the CDDA does not pause when pausing the game, but when entering any station in the game the CDDA is paused again and it will restart again.
Armada.exe
0x1A7C2 = 01E3 to 00E3
0x1496 = 01E2 to 00E2

In the event that the CDDA summary cannot be fixed, this option would be ideal if you can also fix the CDDA pausing when entering game stations.
In this way the CDDA would not have a pause, with which it could be heard in its entirety and without restarts
You must log in or register to reply here.