XBOX Xbox One X: no power

Hello, I'm trying to repair an Xbox One X that doesn't power at all.
The PSU outputs 11.68V but I don't hear the beep when I try to power it one (even while holding the eject and sync buttons at the same time).

The board seems to have some sort of liquid damage on the "back" side, which corresponds to the top of the Xbox: 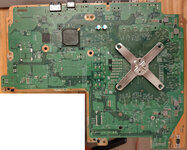 I couldn't see any damage, I gave it a clean with some IPA.
While looking at videos, I found this one where he diagnoses the issue with a MOSFET, but it's a One S.
The power connector is not shorted but I found a "8131" MOSFET close to it (labeled as Q2): 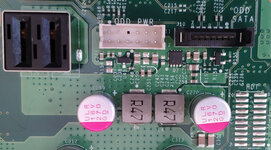 But my multimeter always reads OL, though I found another 8131 next to the fan connector that also reads OL.

What can I try next? Thanks.
T

Maybe check the power at the MOSFETs? Or try checking the standby 3.3v (afaik) power. i remember it was labeled on my xbox one x xdk.
D

tjd2 said:
Maybe check the power at the MOSFETs? Or try checking the standby 3.3v (afaik) power. i remember it was labeled on my xbox one x xdk.
Click to expand...

You were right, thanks! The TP10 "V_3P3STBY" is shorted to ground, the 5V test point close to it does show 5V. 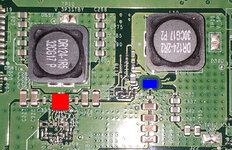 Is there something else to test or I must remove the red chip to see if I still read a short without it?
D

I did more testing, I believe the red chip is ok, the caps at its left and right (C327 to C334) are not shorted.
But the 11 caps around the big inductor, and the inductor itself, are shorted. I guess I have to remove them one by one to find the one faulty?

And where can I find their values?
You must log in or register to reply here.