I don't like U personally for the reasons U very well know:
But if we abstract and evaluate only your work, for example "Flo Boarding":

- There must not be Arena tab in bottom right corner. I may be a bit mistaken in case of quarters, but this tab come in Q2-Q3 2004 and later.
All games with Arena (TH/TR etc...) from 2003 and Q1 - 2004 was released w/o that bar. There also was extra small sticker glued over the cover,
for the US / ESRB N-Gage releases. That's enough serious fail.

- Never were any "Bundle" mark. Only "Not For Sale". It's only your fan-idea.
NFR mark could be used, yes, but with no "bundle" addition.

- No batch number on the edge. It was even on official N-Gage POS covers, with right numbers if it's already was known and supplied to dev.
by Nokia or at least as "XXXXXX" mark if the batch number was unknown to date of print. Same issue with game release date year and it's id,
nothing there in your variant. Here's the right default POS decals for edge:
XXXXXX
01
R/XXXXXXX/YY

- There is no indication of the place where the MMC game card was produced. Also, maybe be a bit mistaken,
but as I remember that info already also printed even on Pre-Production/PoS covers too.

So all in all, quite good work, but only if viewed purely as a fun-work containing factual errors,
and not as an attempt of "professional designer" to create an authentic version of the cover.

- Also, not sure abt using of same bar-code U took for both games. I've seen these options crossed out,
but as far as I remember, their indices/numbers also differed depending on the game.
(Even for crossed/or printed and than hided examples, like in case of Retail Atari 2/WH40K for ESRB/Ca variants).

- And as for both games - if U creating German USK variant, there must be not "Display. Not For Sale" mark.
Nokia did right localisation variant of that mark for USK games too. Sadly have no bigger variant atm over hand,
so here's small but enough clearly viewed photo of few my official sealed USK POS games: 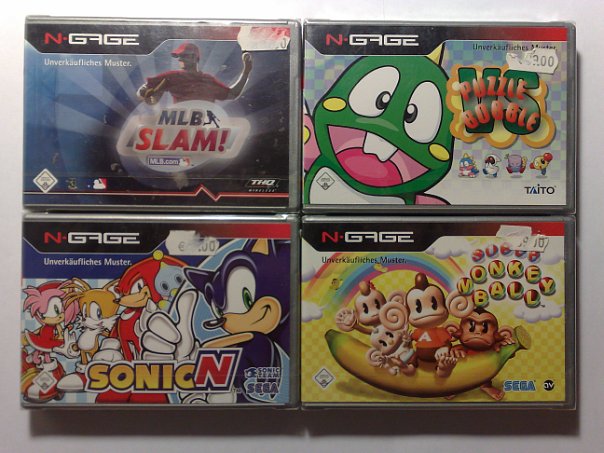 Fee free to use all that information to improve your variants, if U are really interesting to do/sale something,
that really close to original variants of N-Gage covers, and not just a fan-art.
Last edited: Nov 25, 2020
D

AG Join Date
Some time in March 2004...? hard to remember exactly when, but the forum backup has posts going back to then so let's go with that!

How much are you charging for a Flo Boarding? might not be able to splash the cash this side of Christmas, but definitely keen to get hold of one of these.

AG Join Date
Some time in March 2004...? hard to remember exactly when, but the forum backup has posts going back to then so let's go with that!