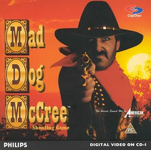 Full motion videos and you shot at it using a light gun (or your mouse at home).


Did any early versions or betas ever appear anywhere ?

I dont expect much, but maybe missing videos or "lost" videos ?


It got releases on :

...and later re-released on 3DS, Wii, iOS and PS3...not sure anything from the past might be hidden in there, but maybe the chance for prototypes is higher in the modern world ?

hiddenpalace.org
Reactions: justz00t
You must log in or register to reply here.