You are using an out of date browser. It may not display this or other websites correctly.
You should upgrade or use an alternative browser.
P

I've been working further on the code for those cheap Aladdin XT PLUS2 modchips you can buy on Eurasia.nu or Aliexpress.
I was able to enable bank control from within XBlast OS, just like on the upcoming XBlast Mod.

So basically, you reprogram the Aladdin's CPLD with this code, replace the SST flash chip for a SST49LF080A and you get a Aladdin XT that boots to XBlast OS and can load either a 512KB bank, 256KB bank or TSOP. Obviously, due to lack of hardware(but also internal resources, LC4032V CPLD is like 99% full), LCD, TSOP split, TSOP recovery and other such features requiring XBlast Mod hardware will not be available. Bank control within Evolution-X dashboard is also unavailable.

To do this modification you'll need:
-A Aladdin XT PLUS2 modchip(I don't know if lookalike hardware will work, I only tested on those cheap Aladdin XT you can still buy)
-A soldering Iron
-A Lattice JTAG programmer or compatible hardware (ex. FT2232 boards). Must be able to supply 3.3V.
-A SST49LF080A flash chip in PLCC32 package(You cannot use the 49LF020(A) that came with the modchip).
-A programmer for the SST49LF080A(TL866CS programmer with PLCC32 socket adapter work really well)
-The files to program the CPLD and SST flash chip.

Archive also contains the other "dumb" variants of the CPLD code as explained in this thread:
<add link to new OG thread>

The procedure is as follow:
1. Solder leads on the 6 programming pads of the Aladdin XT.

2. Connect the Aladdin XT to the JTAG programmer. Here's the one I built. Works great if you have a real Parallel Port on your computer:

3.Use ispVM or urJTAG to program the CPLD with the supplied SVF file.

4. Press the "Browse..." button and select "Aladdin_XBlast.svf" file
5. Press the "Go" button once the main window looks like the screen below. CPLD will be erased, programmed and verified in a single click.

4.Program the SST49LF080A with the bin file of XBlast OS 0.2 Beta. You don't need to fill the whole chip, just flash the 256KB image starting at offset 0xC0000. Here's a screen of what it looks like when using a TL866 programmer.

As my other Aladdin XT CPLD releases. D0 pad is to be used on 1.0-1.5 Xboxes to control D0 signal.
1.6(b) Xbox should use the L1 pad to solder a wire to LFRAME. Using L1 on 1.6(b) will enable modchip support but will not hold signal to ground permanently. This is preferred to avoid MCPX damage overtime. If using L1 pad on 1.6(b) does not yield good results, revert to using D0 pad.

HD and BT pads are to be left unconnected. These are now used to bypass OS loading and load a BIOS bank instead. They are to be used only if OS bank becomes corrupt. To use them, you need to bridge either one of the 2 to ground. If I remember correctly, bridging HD pad to ground will load 512KB bank while bridging BT pad to ground will load 256KB bank but it could be the other way around. So installing it into Xbox, you no longer need to connect any wire except for D0/LFRAME.

This thing is most likely a one shot deal from my part; meaning I'm releasing this mod as is. I don't intend to offer extensive support on this. I've tested it on multiple Xbox motherboards and programmed 2 Aladdin XT with this. Everything works without any issue. That said, have fun with it, use it as you like but do not expect any "official" support on my part for this. Hardware design(or lack of) of these Aladdin XT is simply a joke which can lead to all sort of electrical glitches and unexpected states. I will not accept any responsibility if your Aladdin XBlast doesn't work.

Same goes for the OS, I added support for this mod in it and I plan on keeping that support but it is unlikely I will ever test OS releases on those Aladdin XT. XBlast OS is supposed to run on XBlast Mod hardware(but will always be available for everyone). If a future OS release contains a feature that isn't working on Aladdin XBlast; well it'll just be too bad.

That being said, I hope you'll have fun with it.

As a side note, I'm fairly sure that anyone who's having problems with those stock Aladdin XTs will see compatibility improvement on system that refused to boot. The CPLD code is super-optimized and design implementation reports a FMax of 121MHz. To put this in simple words, CPLD works really fast which gives a lot of time for the output signals from the CPLD to settle and stabilize before rising edge of clock occur(at that moment, electrical signals are latched and kept, anything that occurs between rising edges of clock signal doesn't matter). So if you had Xboxes that didn't boot with those Aladdin XT, you might want to reprogram one and test it again.
<upload zip file>
Reactions: qq1975b, CBones, Getta Robo and 5 others
M

So glad to see you made it over here. I'm curious what is the difference of doing this mod vs the xblast modchip you were selling a while back?

EDIT: I'm reading a bit more it sounds like the xblast has a more powerful CPLD.
P

Yes it does. XBlast Lite has more features compared to Aladdin XBlast:
The hardware of the XBlast LIte is also better designed compared to those Aladdin XT Clones (although it's obivous I'm biased here).
It includes better current drivers to interface signals on the motherboard (D0 and such) and has just a better PCB design overall.
Reactions: muramasa

psyko_chewbacca said:
Yes it does. XBlast Lite has more features compared to Aladdin XBlast:
The hardware of the XBlast LIte is also better designed compared to those Aladdin XT Clones (although it's obivous I'm biased here).
It includes better current drivers to interface signals on the motherboard (D0 and such) and has just a better PCB design overall.
Click to expand...

Is there a chance that we'll see the XBlast Lite chips being sold again in the future? I didn't think they were sold past an original run but I could be mistaken.
P

No there was not and it's unlikely that I'll ever produce another batch in the future. They didn't sell all that well and it's costly both in time and money.

It's a niche product. Most people are content with softmod, TSOP or plain Aladdin modchips as they only want to play homebrews/emulators/backups. XBlast Lite offers little to no added value for them.

That being said. There is other stuff coming soon.
Reactions: muramasa
N

I have a problem with programming the CPLD, I ordered a Lattice HW-USBN-2A programmer.
And I can't get it to work, I keep getting the same error:

I tried it on windows xp and windows 10 but both the same, I tried the lattice diamond and the ISPVM software.
But keep getting the same error, does anyone have any experience with this programmer ?
P

Good to see this post wont be lost iv read many times. could never reply on assembler.
If any 1 into there 360 stuff you can also flash the aladdin with a xecuter nandx just like you would a coolrunner or ace v3. but not with a jr programmer for some reason.
handy for them stubborn 1.6s thanks for all your hard work psyko_chewbacca
P

I have a problem with programming the CPLD, I ordered a Lattice HW-USBN-2A programmer.
And I can't get it to work, I keep getting the same error:

I tried it on windows xp and windows 10 but both the same, I tried the lattice diamond and the ISPVM software.
But keep getting the same error, does anyone have any experience with this programmer ?
Click to expand...

Is there any issue that pops up in Windows Devices Manager when you plug the Lattice programmer?

Can you see the relevant device getting identified.
N

psyko_chewbacca said:
Is there any issue that pops up in Windows Devices Manager when you plug the Lattice programmer?

Can you see the relevant device getting identified.
Click to expand...

I tried so much with the drivers it is all messed up I think. I got a windows 7 VM and I got it to work
N

So I installed a couple of these, and now looking at what bios I should use.
What bios do you guys have installed in your 512 and 256 banks ?
P

I have all the parts needed to try this apart from the TL866CS programmer. Can anyone recommend a cheaper alternative ?
X

Doing here again 128MB and unable to boot once again so did this with FT232 bitbangin CPLD and flashed EEPROM with XBlast OS.. I am done D0 permanently way as lazy. As i get it running again i will consider moving D0 to Aladdin.


Update: "You cannot use the 49LF020(A) that came with the modchip". I just did that. Maybe my CPLD didn't flash correctly.. will try get hands with more correct flashing device and try official way again in future. Anyway boots up with original EEPROM Xblast OS after waiting flickering picture to calm so i can use it to test RAM. I had to update newer Xblast OS to get my controller to respond. Done 128MB ram update successfully.
Last edited: Jan 23, 2020
K

it is configured to boot 512kb bank when power pressed.

if i reverse it, eject = bios, power = xblast, it works as it should, eject boots the x2 bios.

anyone else experienced this?
not too keen on pressing eject to “power” the console and boot bios.
M

Just recently tried to build one. flashed the cpld with xblast, Programmed the plcc32 with minprogrammer... frags. when I tried to hot swap it before programming it with the mini evox would say flash unwritable. I guess I got unlucky with the aladdin clone. Unless there is something you might suggest to try. Ive tried all the svf files. I do not currently have a screen to test the lcd svf.
T

psyko_chewbacca said:
Yes it does. XBlast Lite has more features compared to Aladdin XBlast:
The hardware of the XBlast LIte is also better designed compared to those Aladdin XT Clones (although it's obivous I'm biased here).
It includes better current drivers to interface signals on the motherboard (D0 and such) and has just a better PCB design overall.
Click to expand...

Can i flash the FLASH ROM using hotswap? (replacing random aladdin xt with this while system is on and flashing)
Q

Hi, I can’t see the attached file to mod the Aladdin to an Aladdin XBlast...
M

This is awesome - but can't find the download link ... please re-link

Same issue as K0mpresd, eject will launch assigned bios but power always launches xblast OS with quick boot enabled or disabled and no bios other than xblast loads with power button.
J

Does anyone have these files?
Reactions: Modzvilleusa

If anyone can link the files it'd be greatly appreciated!
Update - Chimeric System's jafaar github page has the required files for programming the fpga.
I haven't tested yet but since the jafaar is a redesign of the aladdin I'd have to assume that it will work just fine. 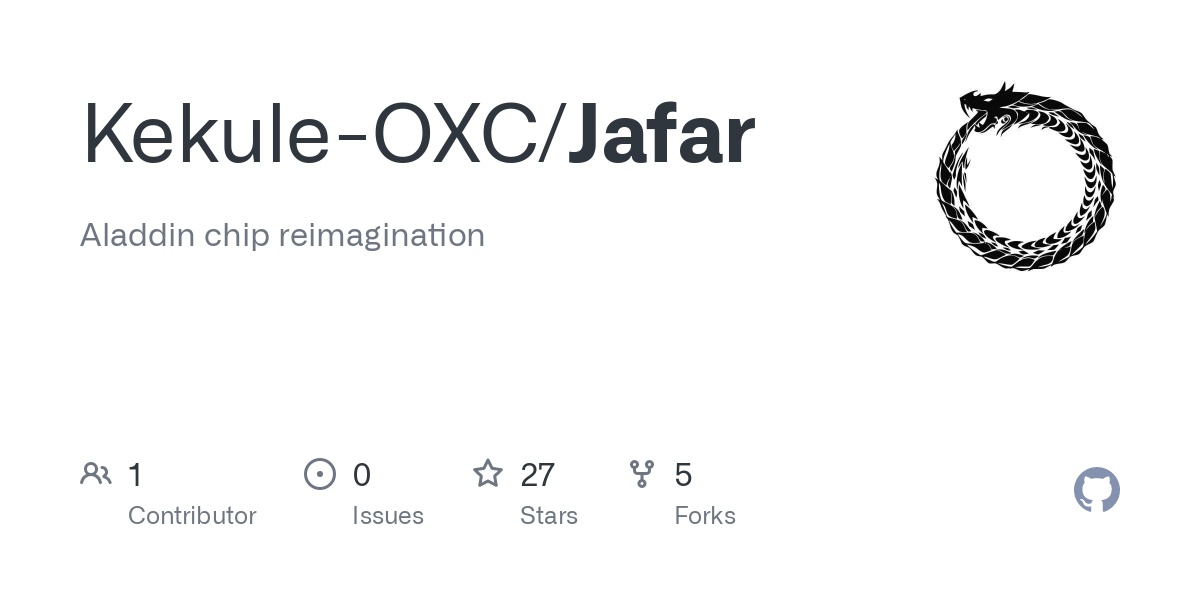 Aladdin chip reimagination. Contribute to ChimericSystems/Jafar development by creating an account on GitHub.