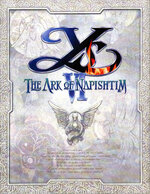 Let's try this again, eh? Maybe this time I'll be on a roll and continue doing this as a weekly thing.

Also, pardon the lack of screenshots this time, I was playing the GOG version, not the Steam version.

Amidst my adventures through digging through Project Deluge, a few things have definitely caught my eye. Can't say they've made much of an impact on me though, as most of the prototypes I've been interested in have nothing interesting about them, as in, near final versions. It was still oddly interesting that some of these things are still prevalent, even if not... that... interesting.

Sarcasm aside, I've toyed around with a build here and there. One of the builds I noted, though, was a build of Ys VI on the PS2. The Ys games... and the PS2 don't have an especially good relationship depending on who you ask, and based on some of the stuff I've cut my teeth on, I can definitely see why. Nonetheless, VI was a game I played through recently, as I had bought the limited edition box set from the initial release. The one with the re-release of the Falcom Special Collection, available on VHS and Laserdisc, actually making this thing accessible to more people. That, and it included a CD with emulators for Ys I, II, III, IV and V. III, of course, being the PC-98 version, and not any of the superior ports because of course it isn't. V, I'm not sure if that is the enhanced edition, and the rest, well, they're there.

Anyhow, VI was the first Ys game I actually fully sunk my teeth and time into. I'd toyed with Book I & II before, but never really anything... that big, to be quite honest. Maybe an hour of grinding, if even barely that.

Can I say I got invested?

For sure, especially seeing as VI wasn't based on the old bump system and instead a more tradition way of isometric RPG combat. No, not FF style fighting, but more like going out into a dungeon and slashing things in your way. At least it doesn't have an odd learning curve... sort of.

Gameplay wise, this game is very solid. It controls well, for the most part. That 1% of controls isn't even due to them being floaty or generally not snappy, that 1% is due to a little movement called the jump attack, where you have to press the Jump and Attack buttons right before you press your direction. This, in practice is not hard to pull off, but if you pull up the wrong FAQ, you'll find the wrong way to do it and spend an hour trying to pull it off in vain, only to pull it off once every 15 minutes or so. This singular move alone and it's astonishingly bad implementation has tarnished many peoples' views of this game. Me personally? Eh, I forgave it later on when I figured out how to master it.

Otherwise, the game is tight and controls how it looks. I cannot stress enough that it is a good game aside from that flaw, and that that flaw isn't even really that big in the grand scheme of things. You have three swords you pick up throughout the game, bound to the 1, 2 and 3 keys respectively, much like an arena shooter like DOOM or Blood. Being that there was a time when all I did was play stuff like Doom, Descent, Quake and Blood, this fits my gameplay style almost too well, so I sunk into it quite well. The three swords are a wind sword, a flame sword and a lightning sword. Usual basic "elements" shit.

This game is also notable in the Ys franchise as one of the few Ys games, if not the only that comes to mind, that allows you to buy healing items and keep them in your inventory instead of use upon pickup. This is quite nice during bosses and difficult dungeons, as you have no i-frames in Ys games. This, though means you can be stunned repeatedly and then promptly be killed, which is not good game design. However, You don't encounter that too often, so it's not an especially glaring issue.

On another note, this is an RPG, so of course EXP is a huge thing to try to gain. My experience with this game was quite grind-heavy, but I can also tell you that I tend to play it a bit too safe because I just suck at video games. It's simple as that. There's also a lot of grinding for emel, this game's currency to upgrade your swords, and later on, (as in, the end of the game) to have armor and a shield forged for you. There's enemies that can take away huge helpings of those. I cannot say that those things are ever fun to deal with, because they really just exist to be a major, MAJOR pain in the ass. Of course, you obtain gold and you find items, much like any other JRPG. You fight oversized bosses, chase after enemies, watch as people misinterpret you, blah blah, usual JRPG faire.

The music in this game is really enjoyable, and it's not a soundtrack that I could really easily forget about. In all honesty, it's the usual Falcom Sound Team jdk faire, but it's still good nonetheless. MOUNTAIN ZONE and THE RUINED CITY "KISHGAL" are definitely a couple notable tracks here. Otherwise, yeah, it's alright. It's not bland or forgettable, if that's what you're wondering. The sound effects are, well, sound effects. One thing I will comment with them though, is the jump attack having a really satisfying THWACK sound to it once you pull it off. But otherwise nothing special of note.

Visually, this game looks quite nice. At least, without filtering on. Sure, some things look blocky, but I'd rather they look blocky than blurry and smeary. If there's one thing I've picked up from playing old FPSes, it's that bilinear filtering looks ugly and if you play Doom or Quake with it, you're doing it wrong. everything in the game has a prerendered sheen to it though, at least, in the characters and enemies. They're all 2D sprites, up to the PS2 and PSP versions. Those are in 3D and don't have a prerendered sheen to them, but uhhhh... I'd prefer the versions with it, please. These 3D versions just do not look good. Saying that though, this game visually has dated nicely, if you ask me. If there's any game I can say the characters in the PC version remind me of, it's Shining Force 3, but I don't especially think much of 3 since most of that game is waiting for text to scroll through with characters explaining tons upon tons of exposition. This is not that however, and I don't think I'll review SFIII any time in the near future.

What you're here for though is the plot, huh? I can give you the plot.


On a remote island, two girls are on the beach of one of the Canaan islands. Olha, a priestess of her tribe, and her younger sister, Isha. Suddenly, everybody's favorite anchor, Adol Christin, washes ashore. Isha, seeing the red-haired boy, starts having violent visions of monsters locked away. Her sister, the priestess of the tribe, takes him in, even though they are the Redhan and he is an Eresian. As he wakes up, her uncle, the chief of the tribe, is quite callice towards him because of how the two peoples clashed in the past. He reluctantly agrees to help Adol, and as Adol sets out on his adventures, he is granted the Livart, the wind sword. Once he takes out the monster not far from their village, he takes the undersea passage and runs into Geis.

Geis, whom of which is the brother of Ernst, the antagonist of the game, challenges you to fight him as a quick way to fool you into thinking he is the main villain you'll constantly be butting heads with. Geis is little more than a sideshow than the main attraction and later on helps you. Ernst is the asshole you want to pay attention to, but he comes into play much later. Once you emerge on the other side, you come across a small trading town where you encounter many characters, including one from Ys II. This tends to be your main hub for a lot of the game, as east of this town is just about every other dungeon, save for a few. Once you take out one of the fairies that Ernst created at the peak of Grana-Vallis Mountain, you obtain Billiante, the fire sword. You can then go on to challenge the Ruins of Amnesia, there you enter the Zemeth Sanctum and obtain the Ericcil.

Continuing on with your adventure, you clear out Limewater Cave, meeting up with your shipmates, with Tetra, your closest companion being everyone's favorite Japanese character archetype, a tsundere. Once you have all the mirror pieces, the Romun fleet with Ernst invade the port town and you go with Tetra to fuck their shit up. Once you kill the fat captain's wife, a... mechanical frog monster? You take Isha and Olha from the Romuns, a constant enemy of Adol's, who were going to sell them into slavery.

You can then go on to the Ruined City "Kishgal" and wipe out that place, but not after promptly having your ass kicked because all of the enemies are very overpowering when you first enter, even if you grind. You clear that dungeon, get up to a level you're comfortable with (50+) and promptly curbstomp Ernst. Using Isha because she has the goddess Alma's blessing to control the key, challenges you to a boss fight where he's a douchebag. He, after being defeated, attempts to absorb its power, but promptly gets turned into dust because the power was too much for him. Good fuckin' riddance, you shitbag. You then take on the Ark, which is little more than an evil weather vane!!!! and Adol sets off to wash upon another shore to embark on a new adventure.
Overall, would I recommend this game to anyone?
Probably not just anyone, but if you're interested, I recommend you try it out.

I may be alive, I may be dead.
I write reviews because I felt like I could after one day. I don't take requests, but I do polls so I don't get burnt out on what I should do next.

I have a lot of misspellings because I usually write in WordPad, or another program that doesn't have a spellchecker, usually either because it is easier or because I don't want some program nagging me about some word that isn't in it's dictionary.